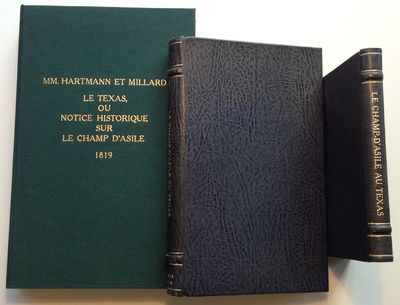 by (FRENCH COLONY OF CHAMP D'ASILE IN TEXAS)
Paris: various, 1819. First. hardcover. very good. The titles are: (1.) (L'Heritier, Louis Francois). Le Champ-D'Asile, Tableau Topographique et Historique du Texas...folding map of Texas and Louisiana. viii, 247 pages, 8vo, handsomely rebound in new full blue morocco; (some light foxing). Paris: Ladvocat, 1819. Second Edition. (2.) Le Champ-D'Asile au Texas. Par C.D. folding plate of colony. 107 pages, 18mo, handsomely rebound in new full blue morocco, uncut. Paris: Tiger, no date, (circa 1820). (3.). Hartmann, (L.). et Millard, Le Texas, ou Notice Historique sur Le Champ D'Asile. folding plate of colony's fortifications. [10], 135 pages, 8vo, disbound, and laid in a new handsome green cloth folding case with tan morocco label; (light foxing throughout). Paris: Beguin, 1819. First Edition. Le Texas is signed by L. Hartmann. Sold together as a collection. Charles Lallemand founded Champ d'Asile "...in a grand scheme to establish in Texas a French military colony which might aid Joseph Bonaparte to win the crown of Mexico, or at least, provide an asylum for French refugees." Webb, Handbook of Texas II, page 13. "Champ d'Asile was a settlement of Napoleonic exiles on the Trinity River near the present town of Liberty, Texas." The colonists first arrived in Galveston in January of 1818. "Obtaining boats from Jean Laffite, the company set out for its destination on the Trinity River. The men erected strong military fortifications and later built dwelling houses of logs. In defiance of Spain's decree against settlement in this region, General Lallemand issued to the world on May 11, 1818, a manifesto setting forth, 'the natural rights' of all men to seek homes in unoccupied lands. He then drew up a code of laws 'founded on justice, friendship, and disinterestedness.' All property was held in common. More occupied with military exercises and hunting than with cultivation of the soil, the group soon became short of food. When friendly Indians brought information that Spanish soldiers from San Antonio were on the march against the little fort, the group took boat back to Galveston Island, where they made camp to await General Lallemand's return from New Orleans with supplies." Webb, Handbook of Texas I, page 328. A hurricane arrived and flooded Galveston Island. Many of the French colonists were killed. The survivors sailed to New Orleans on a ship provided by Jean Laffite or went overland to Louisiana. Hartmann and Millard, Le Texas...includes the diaries of Hartmann and Millard, General Lallemand's declaration of May 11, 1818, and a list of the colonists. "(This work is)...an indispensable source and by far the best of the group." Streeter Texas 1069. Howes H-270. Raines page 109. Sabin 30706. L'Heritier, Le Champ D'Asile contains the text of General Lallemand's. (Inventory #: 256422)
$22,500.00 add to cart or Buy Direct from
Argosy Book Store
Share this item

London : Osborne, Thomas , 1745
(click for more details about A Map of Terra Firma. Guiana and the Antilles Islands)
View all from this seller>