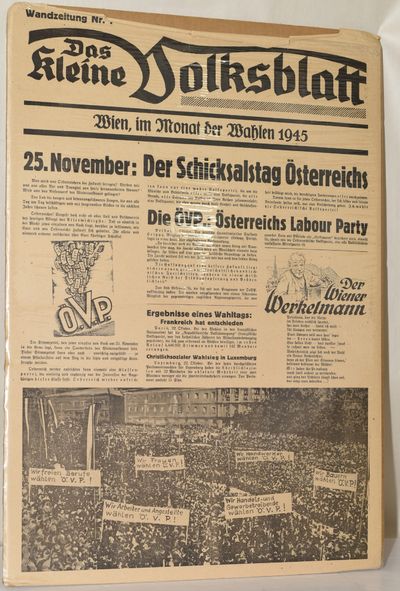 Vienna, 1945. A "Wandzeitung" or "Wall-Newspaper" simultaneously promoting the reeemergence of "Das Kleine Volksblatt" and the newly formed Austrian People's Party (or Osterreich Volkspartei)."Wandzeitung" were generally produced in quantity and affixed with glue to walls.~~The Kleine Volksblatt,or "The Little People's Journal" was established in 1929 as a small format Viennese daily newspaper. It reemerged after the War as the OVP dailiy newspaper was, until July 1947, the central organ of the party.~~Despite its name, the OVP has a center-right orientation (much as the term "Nazi" has the term "Socialist" in its name.) The current version of the "OVP" was organized in April 1945, and this broadside bears the date 1945 and the place of origin, Vienna, or "Wien."~~The OVP today, and historically, represents conservatism, with a platform of stability of social order. In recent years it has expressed skepticism of affirmative action, rights of sexual minorities and other forms of social engineering.~~Few "wall-newspapers" survived, given that they were attached to buildings, trees, or other fixtures. Tthis one is in excellent condition, with a single fold. The broadside clearly was designed to promote the paper's new iteration and the nascent OVP.~~. (Inventory #: 268400)
$100.00 add to cart or Buy Direct from
Black Swan Books
Share this item

[FLORIDA] THE WOMEN OF FLORIDA. VOLUME TWO. THE BIOGRAPHIES. [VOL. 2 ONLY OF 2 VOLUMES]

The Southern Historical Publishing Associates , 1940
(click for more details about [FLORIDA] THE WOMEN OF FLORIDA. VOLUME TWO. THE BIOGRAPHIES. [VOL. 2 ONLY OF 2 VOLUMES])

Baden : Lars Muller Publishers , 2001
(click for more details about [SIGNED] [GRAPHIC DESIGN] THIS WAY -- THAT WAY. PRINTS + POSTERS. RECOLLECTIONS OF WORK)
View all from this seller>