[GLORIOUS REVOLUTION / ABDICATION OF JAMES II]. The debate at large, between the House of Lords and House of Commons [...] anno 1688 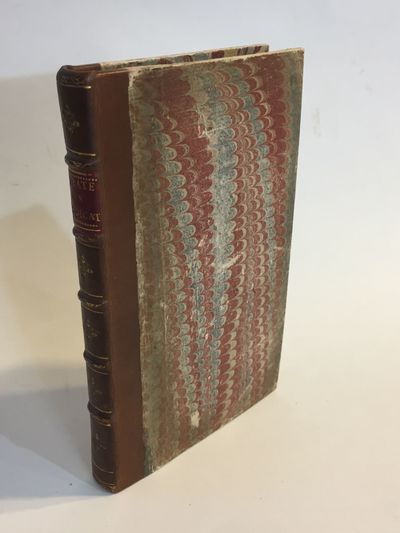 by [James II, King of England. Parliament]
London: Printed for J. Wickins; and to be sold by the Booksellers of London and Westminster, 1695. FIRST EDITION. Hardcover. Very good. Octavo. COLLATION: A-B4 C-F8 G-Q4, COMPLETE. [2], 19-176 pp. Attractive half calf antique, marbled boards, red morocco label gilt, compartments gilt with small tools. ¶ FIRST EDITION of this important collection of Parliamentary debates, providing original and valuable documentation of the constitutional crisis that ensued during the Glorious Revolution of 1688. James II of England (a.k.a. James VII of Scotland), while fleeing to France, dropped the Great Seal of the Realm into the Thames. In Parliament the question was discussed whether he had forfeited the throne or had abdicated. The present volume offers detailed arguments for the both, but ultimately the latter designation was agreed upon, and in a full assembly of the Lords and Commons, it was resolved in spite of James's protest "that King James II having endeavored to subvert the constitution of the kingdom, by breaking the original contract between king and people, and, by the advice of Jesuits and other wicked persons, having violated the fundamental laws, and having withdrawn himself out of this kingdom, has abdicated the government, and that the throne is thereby vacant." The Scottish parliament pronounced a decree of forfeiture and deposition. ¶ In our copy the imprint reads "and to be sold" (in another issue the imprint reads "and sold"). ¶ References: Wing (2nd ed.) E1288A. ESTC R14958. Provenance: the Sunderland copy (sale of the Bibliotheca Sunderlandiana, Puttick & Simpson, 1882, Fourth Portion, lot 9338) -- subsequently in the Theological Institute of Connecticut (now known as the Hartford Seminary) with blindstamps. NB: in 1976 a collection of more than 200,000 books from the Hartford Seminary Library were sold to Emory University, including this one --> deaccessioned from Pitts Theology Library. (Inventory #: 565)
$410.00 add to cart or Buy Direct from
Michael Laird Rare Books
Share this item