[NEW YORK BINDING?]. The Course of Time: a poem 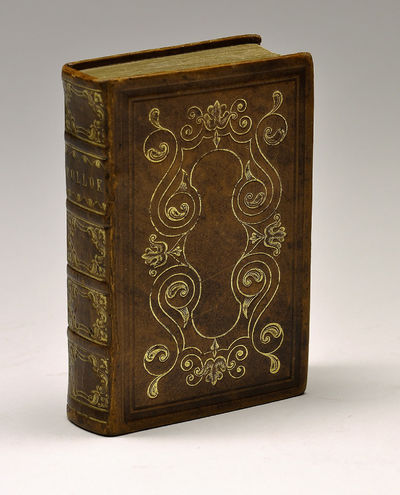 by POLLOK, Robert
New York: Charles Wells, 1833. Hardcover. Very good. N.d. (ca. 1833). 16mo. [2], xiv, [3], 14-227, [4], 230-328, [1], iv-x pp. Contemporary beige calf elaborately gilt, a.e.g. Front free endpaper excised, binding with some minor refurbishment. Bound by Charles Well of New York (?) ¶ Charles Wells was described in New York City Directories as a bookbinder until at least 1832; thereafter he was listed as a bookseller; in 1838 he appears in the Directories as a publisher, and then in 1844 his trade is simply described as "books." There is a good possibility that the present binding came from his shop. Wells may have been the chief importer and user of English-made dies. Not in Edwin Wolf, "From Gothic Windows to Peacocks: American Embossed Leather Bindings, 1825-1855." * Early gift inscription from Ima Hitchcock to Emily Perkins, dated Dec. 25, 1856. (Inventory #: 331)
$375.00 add to cart or Buy Direct from
Michael Laird Rare Books
Share this item

Iter Italicum (COMPLETE SET of 6 vols. + Index volume). A Finding List of uncatalogued or incompletely catalogued Humanistic Manuscripts of the Renaissance in Italian and other libraries

London / Leiden : Warburg Institute / Brill , 1997
(click for more details about Iter Italicum (COMPLETE SET of 6 vols. + Index volume). A Finding List of uncatalogued or incompletely catalogued Humanistic Manuscripts of the Renaissance in Italian and other libraries)