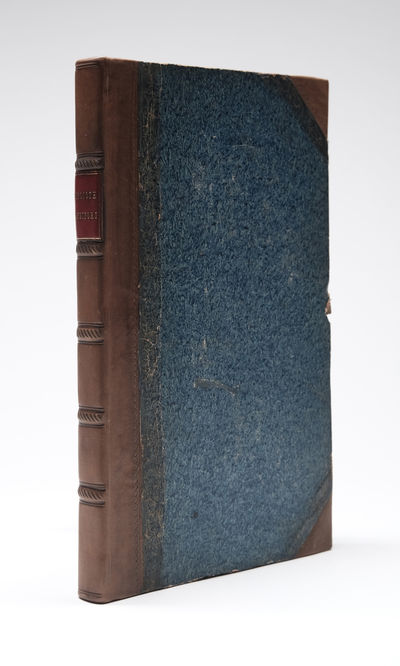 by Sandifort, Eduard. [Hazenberg, H.W.]
Leiden: H.W. Hazenberg Jr., 1816. First Edition. Hardcover. Very good. 8vo. Title (1 f.), iv, 189, [1] pp. containing altogether 3780 lots (with several sequences of lot numbering). Bound in contemporary blue boards, new spine and corner tips, edges completely untrimmed, first and last leaf dust-soiled. ¶ Little known library sale catalogue of a well-known Leiden professor of anatomy who made very significant contributions to Dutch paleopathology. Sandifort (1742-1814) was trained by world-famous Bernard Seigfried Albinus, and became devoted to applied and clinical anatomy. From 1777 to 1781 he published "Observationes anatomico-pathologicae," later followed by the famous series of atlases on the contents of the Leiden Anatomical Museum ("Museum Anatomicum Lugdunuo-Batavae," 1793-1835) which was subsequently completed by his son equally famous son Gerard. "This monumental work is still valued today for its beautiful engravings and descriptions of a great variety of paleopathological conditions" (SOURCE: Global History of Paleopathology: Pioneers and Prospects, ed. Jane E. Buikstra). * Sandifort was fluent in Dutch, German, Swedish, and Italian, and his private library reflects his erudition in an unusually broad range of subjects in the aforementioned languages. The sale catalogue is arranged as follows: Theology, Botony, Law, Politics and Government, Philosophy, Mathematics, History, Geography, Literature, Archeology, Biography, Classics, and Voyages & Travels (the latter being particularly well represented). Notably absent are medical books which were presumably bequeathed to his son Gerard, who contributed a 2-page preface to the catalogue (his library sold in 1849). * PROVENANCE: contemporary inscription on title "Heer Trap" -- blind stamp of the Theological Institute of Connecticut (now known as the Hartford Seminary) on 1st and 2nd leaf. NB: in 1976 a collection of more than 200,000 books from the Hartford Seminary Library were sold to Emory University, including this one --> deaccessioned from Pitts Theology Library (with bookplate). * Scarce: OCLC locates three copies worldwide, all in The Netherlands (Koninklijke Bibliotheek, Leiden University, and Maastricht University), to which we add Bibliotheque Royale Albert I copy, described by Blogie, Col. 50. (Inventory #: 1387)
$1,250.00 add to cart or Buy Direct from
Michael Laird Rare Books
Share this item

[BINDINGS]. A Collection of facsimiles from examples of historic or artistic book-binding [bookbinding], illustrating the history of binding as a branch of the decorative arts. BOUND WITH: Examples of the art of book-illumination during the Middle Ages reproduced in facsimile

London : Quaritch , 1889
(click for more details about [BINDINGS]. A Collection of facsimiles from examples of historic or artistic book-binding [bookbinding], illustrating the history of binding as a branch of the decorative arts. BOUND WITH: Examples of the art of book-illumination during the Middle Ages reproduced in facsimile)
View all from this seller>