[SPIDER WEB BOOKBINDING]. Spring Floods and A Lear of the Steppe 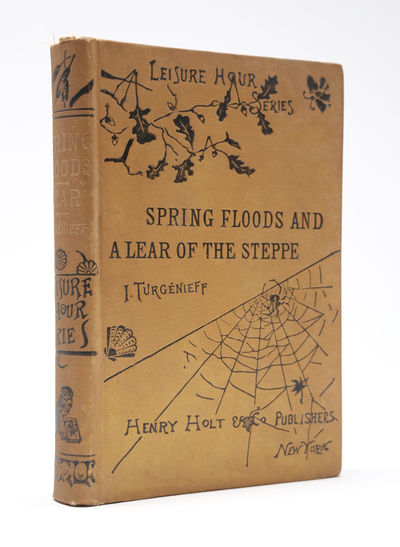 by Ivan Turgenev (Turgenieff)
New York: Henry Holt & Co, 1874. First Edition. Hardcover. Very good. 8vo. Original publisher's mustard cloth, stamped in black adorned with a spider's web in which is perched a long-armed spider. ¶ First Edition in English and the First American edition. The first title was translated by Mrs. Sophie M. Butts; the second by William H. Browne. This book was first published in Russia in 1872-3, but was not published in England until 1895. Holt published six other Turgenev works in his Leisure Hour Series. A hint of age, else an unusually nice copy for a book from this series. This copy has a later state of the ads on the endpapers as usual (but seldom noted). (Inventory #: 1270)
$125.00 add to cart or Buy Direct from
Michael Laird Rare Books
Share this item