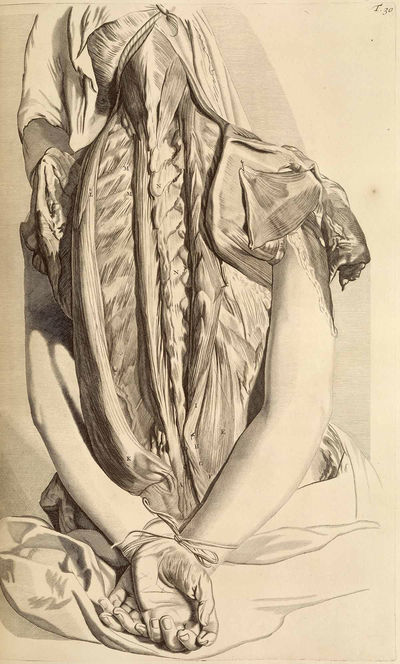 by Bidloo, Govard (anatomist) and Gerard de Lairesse (artist)
Amsterdam: By de weduwe van Joannes van Someren, de erfgenaamen van Joannes van Dyk, Hendrik en de weduwe van Dirk Boom, 1690. Hardcover. Very good. Broadside, 305 x 470 (visible image size), professionally matted and framed. ¶ A huge and extraordinary 17th-century anatomical engraving, justly celebrated by anatomists and artists alike for over 330 years. For obvious reasons the Surrealists found it particularly fascinating. Our example is beautifully framed. ¶ "This stark dissection -- with ragged flesh fully displayed and hands bound with a cord -- signals a commitment to a higher level of realism. To our eyes, the picture may suggest a distressing indifference to, or even pleasure in, human suffering" (Dream Anatomy, National Library of Medicine, 2003). ¶ "Govard Bidloo was born in Amsterdam in 1649 and became professor of anatomy at The Hague from 1688 to 1694, when he took the same position at Leyden. He was later appointed the physician of William III of England, who was originally Dutch, until the King's death in 1702. In that year, Bidloo returned to Leyden to take his old position until his death there in 1713. ¶ "Best known as an anatomist, Govard Bidloo's most famous work was his monumental Anatomia humani corporis published in Amsterdam in 1685, containing 107 copperplate engravings. Like so many large and expensive anatomical atlases of the time, the work was not a financial success, and in 1690 he published a Dutch translation entitled, Ontleding des menschelyken lichaams, using the same plates. The illustrations in Bidloos' work were drawn by Gerard de Lairesse (1640-1711) and engraved by Abraham Blooteling (1640-1690) and Peter van Gunst (1659?-1724?)" -- source: National Library of Medicine, Historical Anatomies on the Web. ¶ REFERENCES: Choulant-Frank pp. 250-253. (Inventory #: 334)
$1,000.00 add to cart or Buy Direct from
Michael Laird Rare Books
Share this item