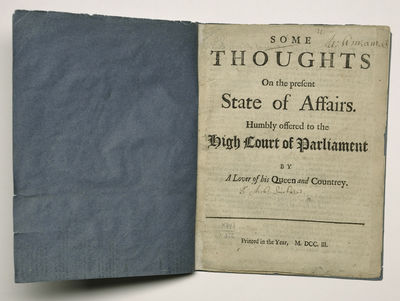 by Sinclair, Archibald, Sir, 1664-1719
[Edinburgh], 1703. First Edition. Softcover. Very good. Together two volumes, small quarto. 12 pp., COMPLETE. Stitched in old blue paper wrappers at a recent date. Contemporary (or near-contemporary) author attributions in ink on title-pages, faint blind-stamps on first and final leaves of both pamphlets. BOTH editions of Sinclair's pamphlet recommending Scottish parliamentary reform, such as a triennial act, as well as toleration for dissent. The pamphlet demonstrates a royalist thread in Country discourse that can be linked to Episcopalian interests.

¶ Two editions appeared in 1703, both sina loca (but Edinburgh). The first edition is ESTC T57077. The second edition is distinguished by the title: 'Some thoughts *upon* the present state of affairs' (ESTC T155643). Priority is here established for the first time, afforded by careful examination of both editions side-by-side; it seems probable that ESTC T155643 was printed from ESTC T57077: compare the catchword on p. 2: in ESTC T155643 this catchword is typographically defective and seems to tumble outside the margin, whereas in ESTC T57077 the catchword, and all associated justification, is quite perfect.