A Catalogue of Manuscripts, Formerly in the Possession of Francis Hargrave, now Deposited in the British Museum 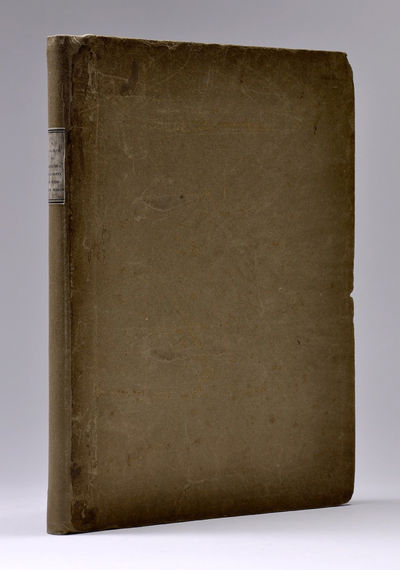 by [HARGRAVE, Francis - former owner]. ELLIS, Sir Henry (compiler)
London: Printed by G. Woodfall, 1818. First Edition. Hardcover. Very good. 4to. [iv], 188 pp. Original drab boards (a little worn, expertly rebacked). Edges uncut and partially unopened. Ex-libris stamps in blind from the Theological Institute of Connecticut (now known as the Hartford Seminary). NB: in 1976 a collection of more than 200,000 books from the Hartford Seminary Library were sold to Emory University, including this one --> deaccessioned from Pitts Theology Library. Some minor spotting, but overall in very good condition, the paper quite crisp. ¶ First Edition. Highly interesting catalogue of the legal manuscripts collected by Francis Hargrave (1741-1821). In 1813 Hargrave's collection of 499 manuscripts, together with his library of books, was purchased for £8,000 for the British nation by a vote of the House of Commons. The catalogue describes the manuscript portion of the Hargrave collection.

¶ Hargrave was the most prominent of the five advocates who appeared on behalf of James Somersett in the case which determined, in 1772, the legal status of slaves in England. This was Hargrave's first trial and secured his reputation as one of most brilliant advocates of his day. Thereafter, he specialised in legal history and commentary, and published many works of legal history. Meanwhile, he quietly amassed a substantial collection of legal books and manuscripts.

¶ Our copy contains a 3-page presentation letter from Rev. Josiah Forshall, at that time Keeper of Manuscripts at the British Museum, to the "Lord Bishop of London" (i.e. Charles James Blomfield). On page 3 Forshall inscribes "a list of such books as you are entitled to from this place in virtue of your office." The present volume is included in Forshall's bespoke list.

¶ Several copies of the catalogue are currently on the market; besides ours, all are in ugly condition. (Inventory #: 567)
$300.00 add to cart or Buy Direct from
Michael Laird Rare Books
Share this item

[PRE-LINNAEAN HERBAL, BEAUTIFULLY BOUND, HAND-COLORED THROUGHOUT]. The British Herbal: An History of Plants and Trees, Natives of Britain, Cultivated for Use, or Raised for Beauty

London : T. Osborne and J. Shipton , 1756
(click for more details about [PRE-LINNAEAN HERBAL, BEAUTIFULLY BOUND, HAND-COLORED THROUGHOUT]. The British Herbal: An History of Plants and Trees, Natives of Britain, Cultivated for Use, or Raised for Beauty)
View all from this seller>