[GLORIOUS REVOLUTION]. [PENAL LAWS]. James Steuarts answer to a letter writ by Mijn Heer Fagel, prisoner to the states of Holland and West-Frisland concerning the repeal of the penal laws and tests 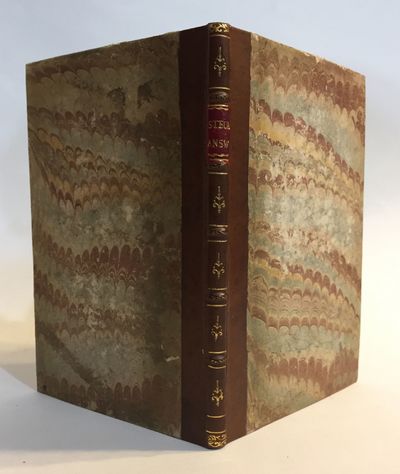 by Stewart, James, Sir, 1635-1713
[Edinburgh] : London, printed and re-printed in Edinburgh: by John Reid, 1688. First Edinburgh Edition. Hardcover. Very good. 8vo. 39 pp. Signatures: A-E4, COMPLETE. Edges untrimmed (somewhat browned). Unobtrusive blindstamp on first and last leaves. Bound in recent quarter calf antique (Trevor Lloyd). ¶ THE REPEAL OF THE PENAL LAWS AND TEST ACTS DURING THE GLORIOUS REVOLUTION. Whereas William of Orange supported repealing the Penal Laws, but opposed the repeal of the Test Acts, his predecessor James sought to repeal the Penal Laws AND the Test Acts, thereby allowing Catholics the right to hold public office. This is the rare first Edinburgh edition; ESTC lists only BL and NLS in the United Kingdom, and Huntington and Univ. of Illinois in the United States. ¶ James Stewart (1635-1713) was one of the leading Scottish radicals in the revolutionary movement. He was offered a pardon by James II, in return for which he sought to persuade his colleagues to return from exile in Holland. In the present pamphlet Stewart replies to a letter written by Gaspar Fagel (1634-1688) describing William's position on the repeal of the Penal Laws, the repeal of the Test Acts, and of religious toleration ("Letter writ by Mijn Heer Fagel, pensioner of Holland, to Mr. James Stewart, advocate"). ¶ "Fagel's letter provoked numerous replies and defences, and clearly established the international framework for the debate on toleration. The radical exiles in Holland, who were divided among themselves on the issue of support for, or opposition to, James' toleration policy, were placed directly in the midst of a propaganda and power struggle between James II and William, and ultimately between England and Holland. In very concrete and practical terms, the exiles' position on the issue of toleration was tied to their willingness to accept a pardon from James and return to Britain, as an endorsement of Stewart's claim that all was well there, or to remain in Holland and continue their fight against James, counting on the support and encouragement of William" (SOURCE: Richard Ashcraft, "Revolutionary Politics and Locke's Two Treatises of Government" p. 486). ¶ Ours is apparently the only copy currently on the market; no copies has appeared at auction in at least 30 years. ¶ Aldis 2821. Wing S5534. (Inventory #: 664)
$920.00 add to cart or Buy Direct from
Michael Laird Rare Books
Share this item