[SCOTLAND, 1690]. Presbyterian inquisition as it was lately practised against the professors of the Colledge [i.e. College] of Edinburgh, August and September, 1690 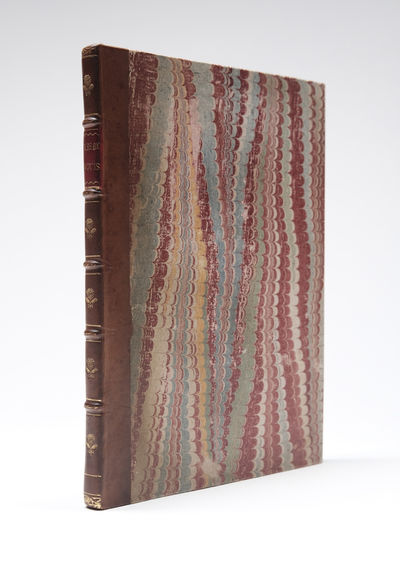 by Monro, Alexander. [David Laing, former owner]
London: Printed for J. Hindmarsh, 1691. First Edition. Hardcover. Very good. Small quarto: [2], 106 pp. Bound in modern half calf antique over marbled boards, old wrappers bound in at end (upper wrapper with early booksellers description and evidence of previous library shelf-marks). Some dust soiling. ¶ DAVID LAING'S COPY. Laing was one of the foremost Scottish antiquarians and bibliographers; he was a learned bookseller and, from 1837 to his death in 1878, keeper of the library of the Writers to the Signet, Edinburgh. He edited a large number of works of Scottish poetry and prose collectors, and formed a spectacular collection of Scottish historical materials which were dispersed posthumously through four huge sales at Sotheby's (1879-1881). The present pamphlet was lot 2988, and features Laing's autograph in pencil inside the front wrapper. ¶ This pamphlet contains the testimony and response of Alexander Monro in answer to charges of "misconduct of office" and also of "Popery." In December 1685 he was appointed principal of Edinburgh University and minister of the high church, succeeding Andrew Cant in both offices. "Monro, though professedly Presbyterian, had strong leanings towards episcopacy, and was strongly attached to the cause of James II. Consequently, when the Presbyterians came into power at the revolution, he resigned his ministerial charge, and was forced to demit his office of principal. In 1688 he was nominated bishop of Argyle by the influence of Viscount Dundee, but he was neither elected nor consecrated. The commission appointed to see the Privy Council Act of 1690 carried out in the Scottish universities made many charges against Monro, and his replies, given in his anonymously published 'Presbyterian Inquisition' (London, 1691), throw much light on the internal condition of Edinburgh University. It was one of the singular circumstances of the case that the declaration of the Prince of Orange was conveyed to the Edinburgh magistrates by Monro, instead of being sent directly to them by the government." ¶ The charges brought against Monro by the Presbyterians basically destroyed his career; Monro's life subsequent to September 1690 cannot be definitely ascertained. ¶ Of the two settings of leaf O1 identified by ESTC, the present copy conforms to setting 1, namely: leaf O1r is signed "O" and O1v has the errata. ¶ REFERENCE: Wing (2nd ed.); M2443. ESTC R5724. LITERATURE: David Murray, "David Laing, Antiquary and Bibliographer" (Glasgow, 1915) passim. (Inventory #: 561)
$525.00 add to cart or Buy Direct from
Michael Laird Rare Books
Share this item