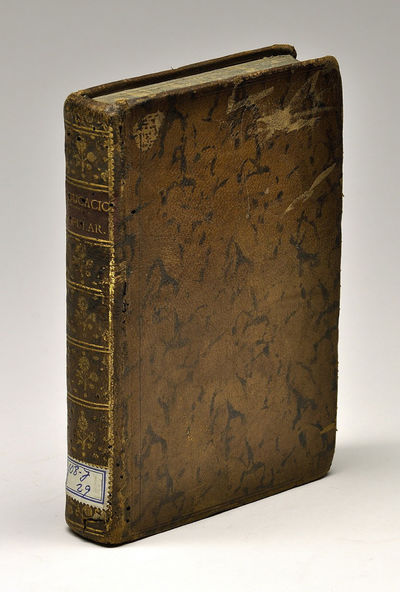 by [Campomanes, Pedro Rodriguez, Conde de]
Madrid: Antonio de Sancha, 1775. FIRST EDITION. Hardcover. Very good. 8vo. [24], 475, [1] pp. Binding with minor rubbing (a few insignificant wormholes) but overall in excellent condition, the text very clean and crisp. Contemporary Spanish mottled sheep, smooth spine gilt, red morocco label, early paper shelf label at foot, marbled endpapers and edges. ¶ An extraordinary work on Spanish business development through education of artisans and craftsmen. The work deals with female labor, trades, apprenticeships, as well as provisions and funds for the disabled and old aged members of the working class. It also has a chapter about Spanish foreign trade, notably with the West Indies. ¶ Albert Boime gives an insightful overview of the Spanish government at the time: "Goya's print of the 'Crockery Vendor' celebrates the Spanish government's ideal of a prosperous and proud artisan class, enunciated in Campomanes's publications of 1774-1775, 'Discurso sobre el fomento de la industria popular and Discurso sobre la educacion popular de los artesanos y su fomento.' Campomanes hoped to put to work all the idle classes of the nation, and to this end urged the cultivation of domestic crafts like pottery (although most of his examples are taken from the textile industry) that would not take people from small towns and farms. Over and over he praised the work of the economic societies for their encouragement of the arts and crafts, emphasizing their broad social appeal and representation. He especially lauded the spread of drawing instruction, which he considered 'the father of practical trades and without which nothing can flourish.' He had warm words for Mengs for his exemplary contribution to the national art, thus uniting the applied and fine arts in a common drive to rehabilitate Spanish commerce and culture" (Art in an Age of Bonapartism, 1800-1815, p. 221). ¶ Over the next few years Campomanes issued 4 (!) volumes of Appendices, obviously not present here.

¶ Our copy was bound in a workshop that was closely associated with the publisher Antonio de Sancha: we have seen two other bindings on this Sancha edition that are identical to ours: Miqueleiz Antiguedades of Pamplona, and Berrocal Libros Antiquos of Madrid (now sold).

PROVENANCE: On title-page the interlocking monogram stamp of the Portuguese diplomat and statesman D. Pedro de Sousa Holstein (1781-1850), duque de Palmela (Palmella). We are grateful to Stephen Ferguson, Princeton University Library, for drawing our attention to this stamp.