The grand question concerning the judicature of the House of Peers, stated and argued. And the case of Thomas Skinner merchant, complaining of the East India Company 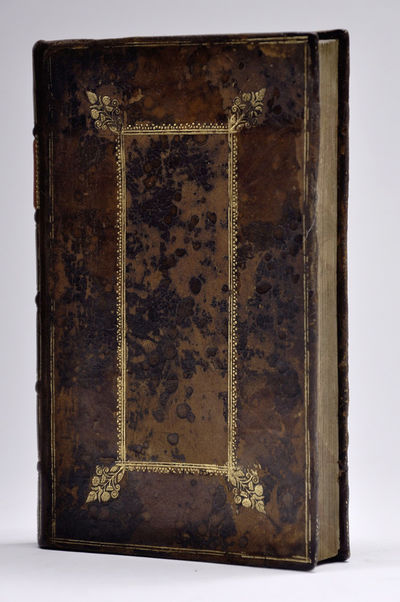 by [SKINNER'S CASE, 1669]. [Holles, Denzil Holles, Baron, 1599-1680]
London: Printed for Richard Chiswel, 1669. First Edition. Hardcover. Very good. 8vo. 1 f., 219 pp. COLLATION: 1 leaf unsigned, B-E8, F-Z4, Aa4, Bb2 (E2, I2 incorrectly signed D2, I3, respectively), COMPLETE, blind-stamps of the Theological Institute of Connecticut (now known as the Hartford Seminary) on first and last leaves. NB: in 1976 a collection of more than 200,000 books from the Hartford Seminary Library were sold to Emory University, including this one --> deaccessioned from Pitts Theology Library. Contemporary panelled English calf (expertly rebacked), gilt floral ornaments at the corners. ¶ FIRST EDITION. Skinner's Case, the name usually given to the celebrated dispute between the House of Lords and the House of Commons in the Parliament of the United Kingdom over the question of the original jurisdiction of the former house in civil suits. In 1668, a London merchant named Thomas Skinner presented a petition to Charles II asserting that he could not obtain any redress against the East India Company, which, he asserted, had injured his property. The case was referred to the House of Lords, and Skinner obtained a verdict for £5,000. The company complained to the House of Commons which declared that the proceedings in the other House were illegal. The Lords defended their action, and after two conferences between the Houses had produced no result the Commons ordered Skinner to be put in prison on a charge of breach of privilege; to this the Lords replied by fining and imprisoning Sir Samuel Barnardiston, the chairman of the company. Then for about a year the dispute slumbered, but it was renewed in 1669, when Charles II advised the two Houses to stop all proceedings and to erase all mention of the case from their records. This was done and since this time the House of Lords has tacitly abandoned all claim to original jurisdiction in civil suits." ¶ References: ESTC R202445. Wing H2459. ¶ Ours appears to be the only copy on the market. SCARCE: The only copy listed in ABPC was sold at Sotheby's (Hodgson's), Oct 6, 1977 (sic!), lot 98, and it lacked the first leaf completely. ¶ PROVENANCE: From the Sunderland Library (his sale, Puttick & Simpson, 1882, Fourth Portion, lot 9334). (Inventory #: 533)
$1,250.00 add to cart or Buy Direct from
Michael Laird Rare Books
Share this item