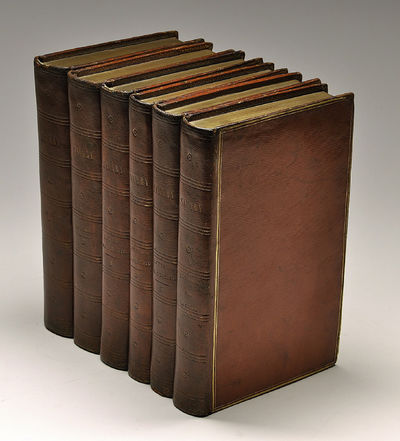 by Savary, Claude-Etienne
Paris and Mecca, 1799. Hardcover. Very good. Large 8vo. Together 6 volumes (collations below). Contemporary French red morocco, smooth spines lettered direct, all edges gilt (some wear to binding extremities, spines a little darkened). ¶ These volumes include all of Savary's accounts of his traveld to Egypt and Greece, plus his very important translation of the Koran from the Arabic into French, with a biography of Mohamed; the present set was beautifully bound in the late 18th- or very early 19th-century.

¶ Claude-Etienne Savary (1750-1788) was an orientalist, pioneer of Egyptology and translator of Koran. In 1776 he departed for Egypt, and after having remained successively in Alexandria and Cairo, he explored (for nearly two years) several islands of Greece and the Archipelago, in particular those of Rhodes. Savary provided many details concerning the daily life of the population. A fluent speaker of Arabic, Savary's sensitive and vibrant account is a contrast striking with the austere description by Volney which appeared two years later. Savary's was the first literary voyage in Egypt, undertaken long before Chateaubriand, Lamartine or Flaubert.

CONTENTS OF THE COLLECTION:

¶ WITH: [Claude Savary, translator]. LE CORAN, traduit de l'Arabe, accompagne de notes, et precede d'un abrege de la VIE DE MAHOMET. A la Mecque, l'an de l'Hegire 1165 [i.e. Paris 1783]. THREE WORKS IN TWO VOLUMES. 8vo. xvi, 230 pp., 269, [1] pp.; [4], 464, [4] pp. Some minor foxing. * First edition of this important, and highly enlightened translation, the second attempt to translate the Koran into French. According to Norman Daniel, this would have certainly been in the luggage of Napoleon when he went to Egypt (see: Daniel, "Islam and the West," p. 313). Savary is usually accredited with having introduced the word Koran (instead of Al Coran) as the standard (see his note 1 in the Preface). He prepared his translation in Egypt where he stayed from 1776 to 1779. In his opinion one could not separate the Koran from its surroundings, thus living in an Muslim environment would benefit his translation. Savary not only, as Daniel phrases it, "humanises and romanticises the old familiar way of looking at the Prophet" (p. 313), he also furthered and qualified the research into the life of Mohammed by employing the terms used by Islamic historians and by ridding Mohammed of some of the stigma's that were commonplace in the West. He profited greatly from his good command of Arabic, which he also used for his well-known Lettres sur l'Égypte and the posthumously published Grammaire de la langue arabe vulgaire. In his Preface Savary very much criticises Du Ryer's translation, which he labels as "une rapsodie platte & ennuyeuse". To prove the superiority of his work he includes a passage of Du Ryer's translation, followed by his own. Marracci's translation he calls a word for word translation in barbaric Latin, though he prefers it over that of Du Ryer. He explains his methodology to be a verse for verse translation, claiming it to be more true to the style and spirit of its original. The added abridged version of the Life of Mohammed seems to be inspired by that of G. Sale's, which had recently been published. The notes are also after Marracci and Sale.

by Morrow, Elizabeth and William Spratling

Croton Falls, NY : The Spiral Press , 1932
(click for more details about Casa Manana)
View all from this seller>