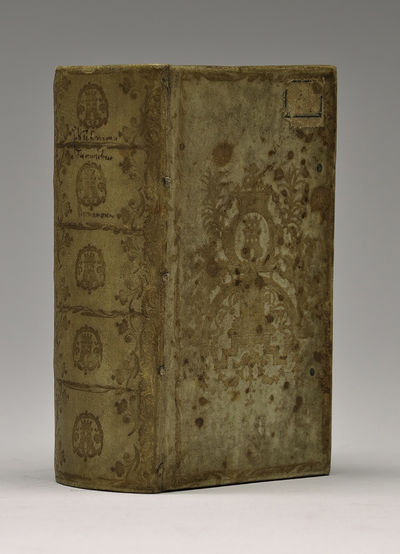 by Kirchmann, J. [Romeyn de Hooghe, illustrator]
Leiden: apud Hackios, 1672. Hardcover. Very good. Romeyn de Hooghe. 12mo., 2 parts in 1 volume: 23 ff., 649 pp. (wrongly numbered 641), 22 ff.; 24 pp. With fine etched frontispiece and 4 etched folding plates by Romeyn de Hooghe. Woodcut printer's device on both titles. Many passages in Greek. BOUND WITH: Kirchmann, J. In funere Pauli Merulae historiarum professoris in Academia Batavorum, & foederatarum provinciarum historiographi, oratio, in qua de vita scriptisque ejus disseritur. Lugd. Batav., ex officina Hackiana, 1672. Woodcut printer's mark on title. 4 ff., 64 pages. Front cover spotted, first blank excised (traces of inscription). Contemporary Dutch vellum Prize Binding, richly gilt, bound in Middelburg by the GLISSEN BINDERY and with the armorial device of the City of Middelburg on both covers and on spine. ¶ First illustrated edition, the only one to contain the folding engraved plates by Romeyn de Hooghe, an excellent copy in a contemporary Dutch PRIZE BINDING. ¶ Part I: A rich collection of inscriptions and of quotations taken from ancient authors concerning the funeral rites, burial places, etc. of antiquity and especially of the Romans, by Johannes Kirchmann (Lubeck 1575-1643), a philologist, was professor of poetry in Rostock and later rector in Lubeck. "De funeribus Romanorum" is a wide-ranging work on the funeral rites and practices of the ancient Romans, including preservation of the corpse, the mourners and funeral processions, cremations, burials and memorials. Written in four parts, each part is illustrated with an engraved, folding plate by Romeyn de Hooghe: the first plate illustrates the corpse of a noble lady being borne on an elaborately draped litter by a group of soldiers while attendants wave wreaths and flowers; the second plate illustrates the funeral procession through the city with soldiers, attendants and mourners carrying torches and wreaths, horses prancing, mourners wailing, etc; the third plate illustrates the cremation of a body upon a pyre of logs some twenty feet high -in the foreground attendants prepare sacrifices of animals and birds and (it appears) several unfortunate people, possibly slaves; the fourth plate shows offerings of dead animals, wine and fruits being placed before an elaborate memorial bedecked with garlands and wreaths. The engraved title page is also of interest, picturing another flaming cremation, this one taking place upon a pyre which is fully five stories high, fitted out with columns and draped with curtains and statuary; at the top a chariot and horses stand ready for the flight to the afterworld (one assumes). ¶ Part II: The appendix is a charming little treatise published in the same year, written by Nicolai Rigaltio, on the subject of parasites and protecting the corpse from them. The second book, bound in, is a funeral oration, also by Kirchmann, delivered at the funeral of Paulus Mercula, a Leiden professor (1558, Dordrecht - 1607, Rostock). ¶ REFERENCES: Landwehr, Romeyn de Hooghe No. 20 (not mentioning the second part (of 24 pp.) by Rigaltius. Rossetti 5898. ¶ BINDING: a Dutch Prize Binding from the GLISSEN BINDERY in Middelburg (a.k.a. Middleburgh). We are grateful to Jan Storm van Leeuwan for his identification of the bindery and of the arms of Middelburg. The present binding features van Leeuwen's tools 9a + 9b and roll III. The large panel stamp on the covers represents the arms of the City of Middelburg; this stamp was actually City property. It is reproduced in DDB p. 557 (tool 2) and p. 559 (block F). The Glissen Bindery may have existed for only three or four years (ca. 1790-1793; see DDB IIB, pp. 691-695). For obvious reasons, securely identifiable examples from this Dutch workshop are rare in private ownership. (Inventory #: 30)
$600.00 add to cart or Buy Direct from
Michael Laird Rare Books
Share this item