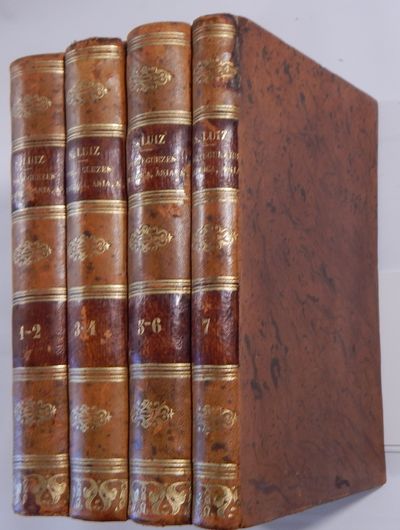 Volume I begins with a comprehensive chronology of Portuguese exploration in Africa, Asia, America and Oceania, commencing in 1412, followed by descriptions of the voyages and discoveries.

Contemporary marbled sheep, spines gilt with brown lettering labels. Marbled paper endpapers. Volume I with the bookseller label of Livraria de Joao Pereira da Silva, Lisboa; and also a label from Francis Edwards of London: "This Book was purchased in 1941 from London whilst the great battle for civilization was in progress."

Rare. OCLC lists scant copies in any early edition. This edition not seen at auction since 1939. Not found in Hill or Cox.

A Diccionario Geographico was subsequently issued, usually designated as Volume 8; this set contains the announcement for the dictionary on the leaf following Vol. 7, p. 279 as not yet ready. Where seen, the dictionary is usually with the second edition and bears an imprint different from that of Borges.

A couple of the plates have light foxing; 1891 (?) ownership signature across the title of each volume, and with the title of Volume 1 with a light offset presumably from a clipping laid in. But essentially a near fine set with only traces of wear and rubbing. Text in Portuguese. (Inventory #: 19214)
$5,000.00 add to cart or Buy Direct from Thorn Books
Share this item

The Circus is Here!

St. Petersburg : Nikodim Press , 2022
(click for more details about The Circus is Here!)