The Soul of the Moving Picture 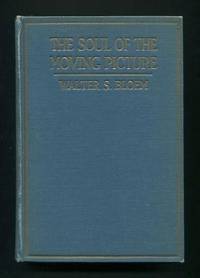 by Bloem, Walter S. (translated from the German by Allen W. Porterfield)
New York: E.P. Dutton & Company. Very Good. (c.1924). First American Edition. Hardcover. (no dust jacket) [light wear to extremities and a bit along hinges, gilt spine lettering a bit dulled but still fully readable, one-time owner's name at top of ffep, light staining to rear free endpaper]. (B&W photographs) An early attempt to formulate an aesthetic of the cinema, not on a purely theoretical basis but also grounded in the realities of film production and economics: the author, as a scenarist himself, was well aware that this still-nascent art form operated as a unique fusion of art and business, and that "the task of the film artist is always....to effect a happy union between [the two]." (He makes plenty of observations that wouldn't sound at all odd coming from the lips of someone like Samuel Goldwyn or Darryl Zanuck, e.g.: "A work, let it be ever so artistic and valuable in itself, which brings economic distress to the film company that produces it, harms indirectly the entire film business as an art.") Writing from within the midst of the glory days of the German silent cinema, many of his examples are naturally drawn from films still regarded as classics today -- THE CABINET OF DR. CALIGARI, DIE NIEBELUNGEN, DR. MABUSE, DESTINY -- and the 22 photographic plates (all present) are drawn from those films as well. One wonders what a close reading of this book (which I have not performed) might bring out, since Bloem reportedly welcomed Hitler's rise to power in 1933, and indeed went on to become a member of the Waffen-SS during World War II. I'll let you work on that one. . (Inventory #: 20137)
$75.00 add to cart Available from ReadInk
Share this item
ReadInk
Offered by

Death of an Old Goat

New York : Walker and Company , 1977
(click for more details about Death of an Old Goat)

The Villars-Manningham Papers, and Other Stories of Sherlock Holmes

Scarborough, Ont. : Catalyst , (c.1978)
(click for more details about The Villars-Manningham Papers, and Other Stories of Sherlock Holmes)
View all from this seller>