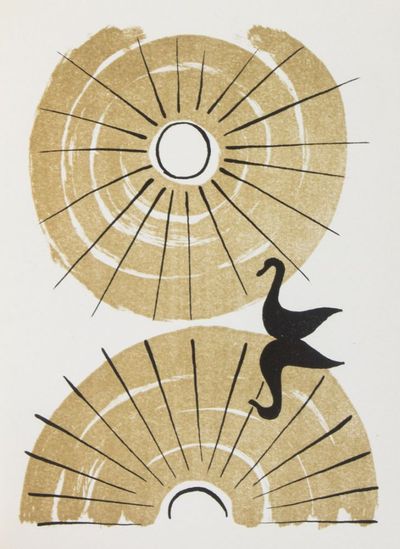 by Toesca, Maurice (Poems by); André Fougeron (Illustrated by)
Paris: Raoul Mortier, 1945. Limited First edition. Softcover. vg. 1/260. Quarto. 60, [2] loose pages, as published. Uncut and unopened copy. Original glassine over printed wrappers. Book housed in a paper covered chemise, with black lettering on spine. Chemise housed in its matching paper covered slipcase. Laid in a handwritten letter from Maurice Toesca to "Monsieur le Professeur Raymond Turpin*." Accompanying the letter is an original handwritten poem titled "Quand me prendra..." Long inscription on half-title by the author to Professor and Mrs. Raymond Turpin. This collection of the author's poems is splendidly illustrated throughout with seven original duo-tone lithographs by André Fougeron**. One of 260 copies, of which this is No. 227. Minor shelf wear on slipcase. Text in French. Slipcase in overall good+, chemise, glassine, wrappers and interior in very good condition. * Raymond Alexander Turpin (1895-1988) was a French pediatrician and geneticist. In the late 1950s, his team discovered the chromosomal abnormality, trisomy 21, responsible for Down syndrome. ** André Fougeron (1913-1998) was aknowledged as the foremost socialist realist painter in France. With an admirable tenacity he maintained his belief in painting's duty to comment on the social injustices of the day, from Third World famine to contemporary police brutality and racism; "De la negritude" was the title of a 1994 exhibition at the Galerie Jacques Barbier. (Inventory #: 39142)
$425.00 add to cart or Buy Direct from
Eric Chaim Kline Bookseller
Share this item