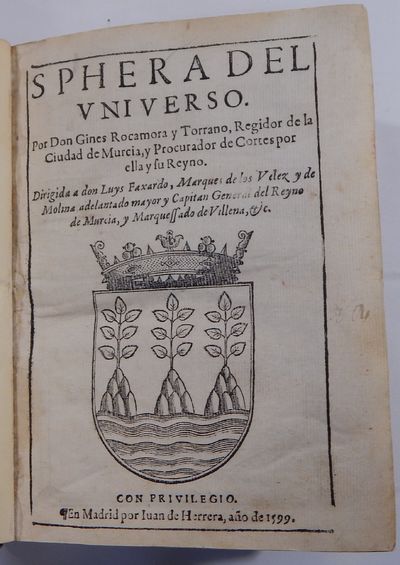 by Rocamoro y Torrano (Ginés)
Madrid: Juan Herrera, 1599. First edition. Hardcover. Near fine. 4to. (14), fol. 1-271, (1). Woodcut of the arms of Don Luys Faxardo on the title page. Full vellum, ties, manuscript spine title Illustrated with woodcuts, including several full page plates of the sphere of Ivan Sacrobosco, another illustrating both solar and lunar eclipses, and a large woodcut of the solar system showing the earth in the center and the sun revolving in an orbit between Venus and Mars.

This title is somewhat bibliographically confusing in that the preliminaries differ from copy to copy, and the title page is sometimes typeset, sometimes with the shield of Don Luys. Palau (271732) remarks that the author may have spoiled some of the early leaves by not including his frontispiece ("Es debido a que el autor inutilizó las primeras hojas por no haber incluido su retrato..."), and by substituting 18 new leaves. This copy lacks p2, the frontispiece, as is frequently the case; but the leaf with the Sonnet of Lope de Vega (obverse) and the Licenciado Camarino (reverse) is present here, though not so in other copies.

Joannes de Sacrobosco, a scholar-astonomer at the University of Paris, published his work on the Sphere about 1230, which gives a readable account of the Ptolemaic universe and contains a clear description of the earth as a sphere. Even though Copernicus was formulating his ideas of a heliocentric solar system in the mid 1500's, this concept was apparently not yet considered the norm.

This is a very good copy: folio 74 has a closed and neatly mended horizontal tear (no loss) and folio 104 has a repair of a closed marginal tear on the bottom,affecting only the bottom border and not the image of the sphere on its reverse.