Walls of America (House of Uncle Sam) [Inscribed and Signed] 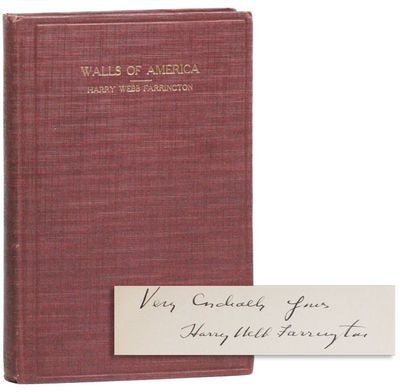 by FARRINGTON, Harry Webb; W.H. Mace, intro
Bradley Beach, NJ: Rough and Brown Press, [1925]. First Edition. Octavo (20cm.); original maroon blind-ruled buckram, upper cover and spine lettered in gilt; 142,[2](ads)pp.; illus., including photographs. Fine. Signed and inscribed "Very Cordially Yours / Harry Webb Farrington" on front free endpaper. Small aviation-themed illustrated broadside Christmas greeting card (16cm.) printed in green and signed in print from Mr. and Mrs. Harry Webb Farrington, reproducing Farrington's hymn "The Men in Air." A collection of poems and essays dedicated to the "four greatest Americans," (p. [3]), Franklin, Washington, Lincoln, and Roosevelt. The project, according to the author's Foreword, was inspired by an incident during World War I when Farrington passed a group of friendly Cuirassiers in Ain, France, during a stroll. Though Farrington had already published a book of war poetry, (Poems from France, 1920), his favored medium of expression was hymn writing. (Inventory #: 25570)
$50.00 add to cart or Buy Direct from
Lorne Bair Rare Books
Share this item

The Girl on the Boat

London : Herbert Jenkins Ltd , 1922
(click for more details about The Girl on the Boat)
View all from this seller>