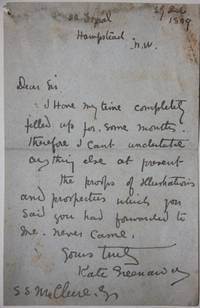 by Greenaway, Kate
1889. NA. Good Plus. The letter, presumably to S. S. McClure, the founder of "McClure Magazine", is written from Hampstead, is as follows: "Dear Sir, I have my time completely filled up for some months. Therefore I can't undertake anything else at present. The proofs of illustrations and prospectus which you said you had forwarded to me never came. Yours truly, Kate Greenaway." The letter is written in a hasty but still legible hand. McClure's became a popular illustrated general interest magazine in America, especially noted for its muckraking journalism. Samuel Sidney McClure (1857-1949) was its co-founder. However, it did not get off the ground until 1893. (The magazine lasted until 1929.) Thus here we have the wannabe publisher being rebuffed in his pursuit of Greenaway who was at the peak of her fame. The letter measures 14.5 by 9 cm. It has a fold line across the center, and it is soiled particularly on the top, with a very minor loss of paper not touching the content. (Part of Greenaway's address is blurred by the soiling.) Still, a scarce letter in Greenaway's hand that relates directly to the business of publishing and perhaps provides a glimpse into Greenaway's life at the time. With matting, from which the letter was carefully removed to examine the back but attractive and ready to have the letter relaid therein. (Inventory #: 003948)
$850.00 add to cart Available from
White Fox Rare Books & Antiques
Share this item
White Fox Rare Books and Antiques
Offered by


(click for more details about Album of 29 Watercolors from 19th Century Pondicherry, India)
View all from this seller>