Lavengro; the scholar, the gypsy, the priest. In three volumes 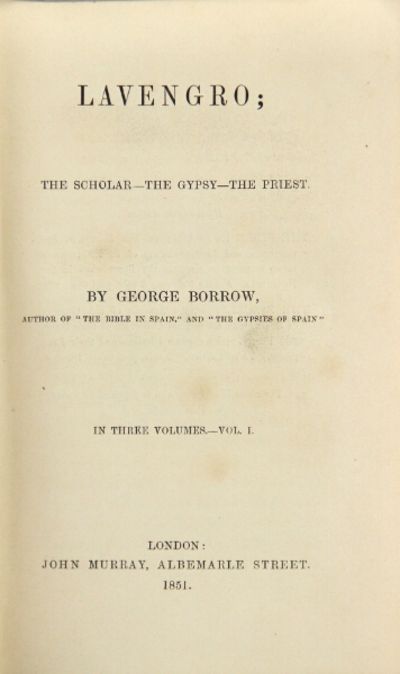 by Borrow, George
London: John Murray, 1851. First ediiton, 8vo, 3 volumes, engraved portrait frontispiece in volume I; original ribbed green cloth, paper labels on spines; a very good, sound set. Borrow's most controversial work which gained him innumerable critics and enemies. Autobiographical in content (although he denied it), Lavengro was a vitriolic attack on Roman Catholicism in England, as well as a brilliant series of character studies and observations on life in the mid-19th century. Ashley Library I, p. 44; Sterling I, 58; Wise, Borrow, 11; Wolff 598. (Inventory #: 46588)
$316.25 add to cart or Buy Direct from
rulon-miller books
Share this item

Compositions in outline ... from Judd's Margaret. Engraved by Konrad Huber

Conversation. An address delivered before the Newburyport Female High School, on the third anniversary of its establishment, December 19, 1846 ... Second edition

Boston : James Munroe and Company , 1847
(click for more details about Conversation. An address delivered before the Newburyport Female High School, on the third anniversary of its establishment, December 19, 1846 ... Second edition)
View all from this seller>