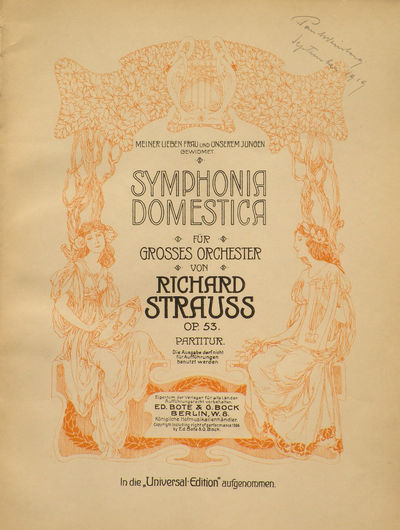 Printed note to foot of title: "In die "Universal-Edition" aufgenommen." No plate number to p. 42.

Composed in 1902-1903; first performed in New York with Strauss conducting on March 21st 1904. "The Symphonia domestica inspired at first even more controversy than Ein Heldenleben... Originally titled Mein Heim: ein sinfonisches Selbst- und Familienporträt, the work was always referred to by Strauss as a symphony or symphonic poem, and there are indeed four sections that correspond loosely to symphonic movements: introduction (presentation of major characters and their themes), scherzando (child at play, his parents' happiness), cradle song and Adagio (child is put to bed, thereafter a parental love scene), and finale in the form of a double fugue (a new day begins with quarrelling and happy reconciliation)." Bryan Gilliam in Grove Music Online. (Inventory #: 24642)
$132.00 add to cart or Buy Direct from
J. & J. Lubrano Music Antiquarians
Share this item

Lucca : Libreria Musicale Italiana , 2008
(click for more details about Bologna Q15: The Making and Remaking of a Musical Manuscript. Introductory Study and Facsimile Edition by Margaret Bent. Volume I: Introductory Study. Volume II: Facsimile)
View all from this seller>