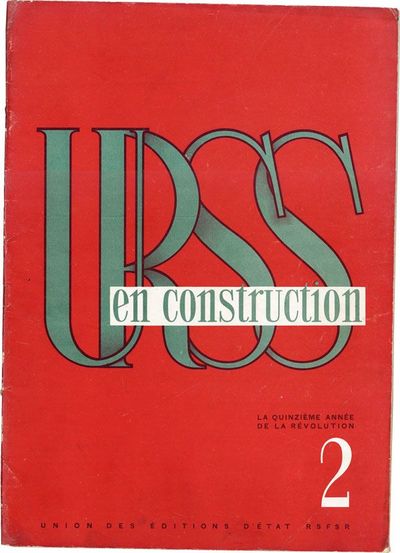 by PIATAKOV, G[eorgy] (editor-in-chief)
Moscow: Union des Éditions D'État RSFSR, 1932. First Edition. Folio (41.5cm); printed card wrappers, stapled; [34pp]; illus; text is in French. Light wear and thumbing to extremities, with some dustiness to rear wrapper; spinal extremities and two chips to rear wrapper expertly restored; Very Good. Well-preserved issue of this landmark Soviet art magazine, issued from 1930 to 1941 to celebrate the achievements of the first two Five Year Plans and (through various foreign-language editions) to propagandize the stark contrast between the vibrant Soviet economy during this period and the stagnation of Western economies under capitalism. "All the visual strategies of the propaganda photobooks, designed by Lissitsky, Rodchenko and others...were developed in USSR in Construction, one of the most beautifully produced magazines of the twentieth century" (Parr-Badger, The Photobook, I:148).

The present issue is devoted to the agrarian workers of the Soviet Union, with text by N. Jouravlev and A. Méromski, and photographs throughout by A. Chaikhet, M. Katsenko, and B.Ignatovitch, et al, featuring many superb aerial and panoramic images of farms, farmers, and farming machinery. (Inventory #: 25154)
$500.00 add to cart or Buy Direct from
Lorne Bair Rare Books
Share this item

The Nutshell Studies of Unexplained Death

by BOTZ, Corinne May

Frederic Remington: The Color of Night

Washington DC : National Gallery of Art; Princeton University Press , 2003
(click for more details about Frederic Remington: The Color of Night)
View all from this seller>