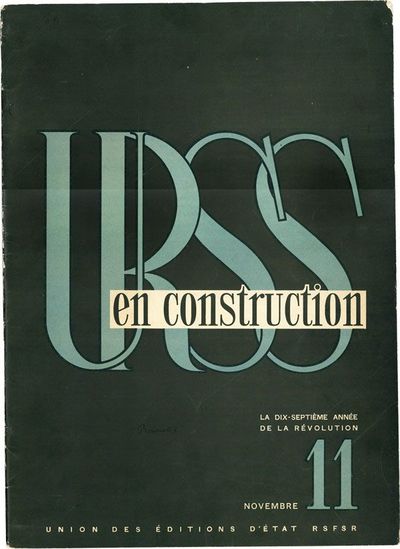 by PIATAKOV, G[eorgy] (editor-in-chief)
Moscow: Union des Éditions D'État RSFSR, 1933. First Edition. Folio (41.5cm); printed card wrappers, stapled; [38pp], with the [8]-page split-level photographic insert bound in at centerfold; illus; text is in French. Light wear along spine fold and extremities, with shallow, semi-circular stain to upper margin of preliminary pages; Very Good+ to Near Fine. Well-preserved issue of this landmark Soviet art magazine, issued from 1930 to 1941 to celebrate the achievements of the first two Five Year Plans and (through various foreign-language editions) to propagandize the stark contrast between the vibrant Soviet economy during this period and the stagnation of Western economies under capitalism. "All the visual strategies of the propaganda photobooks, designed by Lissitsky, Rodchenko and others...were developed in USSR in Construction, one of the most beautifully produced magazines of the twentieth century" (Parr-Badger, The Photobook, I:148).

The present issue celebrates the 10th anniversary of the creation of the Buryat-Mongolian Autonomous Soviet Socialist Republic, created as a result of the 1923 merger of the State of Buryat-Mongolia and Mongol-Buryat Oblasts. Contents feature the Buryat-Mongol people, their culture, leadership, accomplishments, and contributions to the Soviet Republic. Photographs credited to M. Alpert and M. Prekhner. (Inventory #: 25163)
$550.00 add to cart or Buy Direct from
Lorne Bair Rare Books
Share this item

The Records of the Virginia Company of Virginia. Vols 1-4 (complete in six parts)

Bowie, MD : Heritage Books , 1996
(click for more details about The Records of the Virginia Company of Virginia. Vols 1-4 (complete in six parts))
View all from this seller>