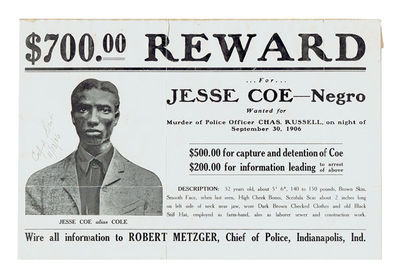 by [COE, Jesse]
Indianapolis, IN: N.P., 1906. Original lithographed wanted poster, with text and photographic portrait printed in black on recto only; measures 10.75" x 7". Thin strip of paper reinforcement along top edge verso, a few faint folds and small tears; brief penciled notation to left of portrait; Very Good, clean example, without loss. A reward bulletin issued by the Indianapolis, IN Chief of Police, Robert Metzger, for gunman Jesse Coe (alias Cole). About 8pm on the night of September 30, 1906, Coe shot officer Charles J. Russell at close range in a neighborhood near 24th Street and Indianapolis Avenue; he was later taken to an Indianapolis hospital, where he died of his wound. Russell's partner, Edward J. Petticord, chased after the alleged gunman (Coe), and was shot in the back by another suspect. Petticord died two days later, and the man accused of killing Petticord was arrested, convicted, and hanged at the Indiana State Prison in February, 1907. Law enforcement officials launched a nationwide manhunt for Coe, who was believed to have left Indianapolis by train, disguised as a laborer. Two years after the shooting, Coe's cousin led authorities to him while he was squirrel hunting in Kentucky; when approached by authorities, Coe was shot dead after pointing his rifle at them.

The broadside is rare, with no example held by any OCLC member institution. A presumably later example is held by Kent State, offering a higher reward of $1500 for Coe. Of particular interest on the present example is the penciled notation to the left of Coe's portrait, stating "Capd. Shot - 11/13/06," clearly giving a date that is much earlier than the documented capture and shooting of Coe two years later. A rare ephemeral survival from a high-profile killing of a police officer by an African American.

Son of the Morning Star: Custer and the Little Bighorn

San Francisco : North Point Press , 1984
(click for more details about Son of the Morning Star: Custer and the Little Bighorn)

New York : French & Wheat , N.d. [ca 1868?]
(click for more details about The Marvelous Musical Prodigy, Blind Tom, The Negro Boy Pianist, Whose Performances at the Great St. James and Egyptian Halls, London, and Salle Hertz, Paris, Have Created Such a Profound Sensation... &c. [Title from cover: Songs, Sketch of the LIfe, Testimonials, &c...])
View all from this seller>