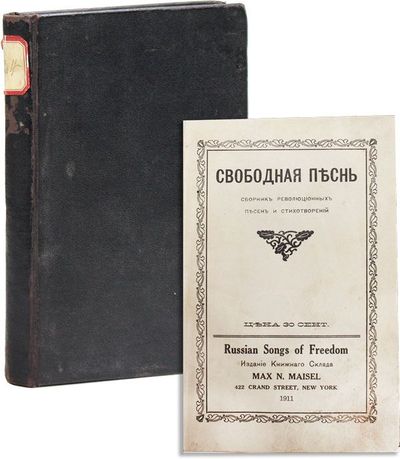 by [RADICAL & PROLETARIAN LITERATURE] GERSHUNI, Grigorii (et al)
New York: Max N. Maisel, 1911. Hardcover. A compilation of Russian "songs of freedom" and revolutionary poems by various authors. Some of the works included here are early printings of Ruzrushennyi Mol' ("The Ruined Pier"), by Grigorii Gershuni, a Russian revolutionary and a founder of the Socialist Revolutionary Party; and Maxim Gorky's Piesnia o Bureviestnikie ("The Song of the Stormy Petrel"). Undoubtedly, however, one of the most interesting poems is Fedorushka, here erroneously attributed to Leo Tolstoy. The poem was actually written in 1880 by Mikhail Rozengeim, for whose poetry the term "liberal accusation" was coined. Tolstoy, who disliked this particular poem, expressed great displeasure at the incorrect attribution. The mistake was most likely made by the publisher, Max N. Maisel, whose shop in the Lower East Side was frequented by many political and cultural radicals. E-book format only in OCLC as of October, 2014. First edition, 12mo (18.25cm.); contemporary black cloth, private paper spine label printed in manuscript; 159pp.; hinges weak, textblock shaken, page edges soiled, old crude tape repair to index page; Good. (Inventory #: 21365)
$450.00 add to cart or Buy Direct from
Lorne Bair Rare Books
Share this item

The Case of the Counterfeit Eye

New York : William Morrow and Company , 1935
(click for more details about The Case of the Counterfeit Eye)

The Case of the Dangerous Dowager

New York : William Morrow and Company , 1937
(click for more details about The Case of the Dangerous Dowager)
View all from this seller>