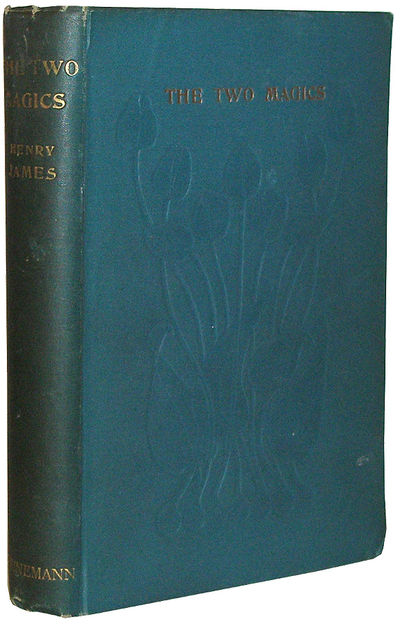 by James, Henry
London: William Heinemann, 1898 First edition, second impression, colonial issue. Publisher's decorative blue cloth (Heinemann's third standard binding), with an illustration to the front board of nine tulips in blind, lettered in gilt, printed on wove paper (colonial sheets). Very good, with some light wear and rubbing to the extremities, bright gilt, former owner's bookplate to the front pastedown, a hint of toning to the otherwise fresh pages. Overall, a clean and pleasing copy. Edel and Laurence A52a. This copy is one of 300 copies of the colonial issue of The Two Magics that, according to James' bibliographers, "were transferred to the domestic market, some of them appearing in the third standard binding." Copies such as this one were comprised of American sheets in English bindings to supplement the English printings; Edel and Laurence explain that these colonial issues "replaced quire shortages in the domestic second impression." Accordingly, while this issue came later in the second impression, it is still considered scarce because of its unusual issue. The Two Magics collects two pieces of James' short fiction: the novella "The Turn of the Screw" and the short story "Covering End." Now a classic and one of James' best known tales, "The Turn of the Screw" is a gothic ghost story that tells of a governess' experience caring for two children who are haunted by the ghosts of their past caretakers. "Covering End" is James' adaptation for the one-act play Summersoft he wrote in 1895 for the actress Ella Terry.. Hard Cover. Very Good. (Inventory #: HJ024)
$1,500.00 add to cart or Buy Direct from
B & B Rare Books
Share this item

New York: Covici-Friede , 1934
(click for more details about A Cool Million: The Dismantling of Lemuel Pitkin)