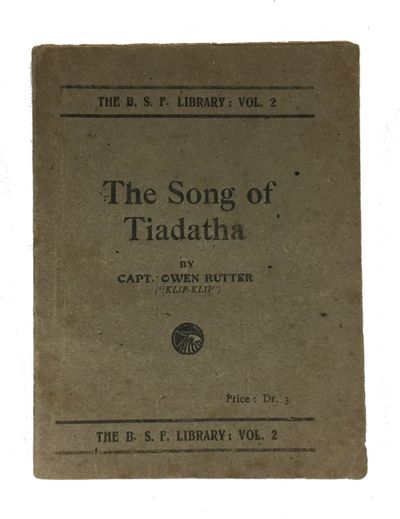 by Rutter, Owen, 1889-1944
Salonica: Published during the War, 1919. 1st separate ed.(?). Paperback. Very Good. [10], 114p. Original gray wrapper. 16cm. Foxing on a few leaves at both ends. Browning on some leaves. Reprinted from the Balkan News (in which it appeared serially). B. S. F. Library: Vol.2. Poetry about the coming of age of a young British man of privilege during the Salonika Campaign in World War I. It was based loosely on (or was a parody of) Longfellow's "The Song of Hiawatha." It was quite popular in its later British editions. This Salonica edition is quite uncommon. (Inventory #: 84013)
$450.00 add to cart or Buy Direct from McBlain Books
Share this item

Vital Records of Kittery, Maine to the Year 1892

Persecutions of the Greeks in Turkey since the Beginning of the European War: Translated from Official Greek Documents

New York : Published for the American Helenic Society by Oxford University Press American Branch , 1918
(click for more details about Persecutions of the Greeks in Turkey since the Beginning of the European War: Translated from Official Greek Documents)
View all from this seller>