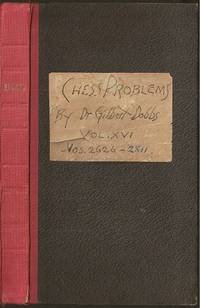 Gilbert Dobbs, throughout his interest in chess composition, kept log-books of his composition. This is one of the many log-books he created. It has at least one problem for each page of the book. He numbered these as he composed them. The problems were hand stamped with solutions below. As some became published the publication name and date is noted beside the problem. In addition to the hand written problems, there are some clipped newspaper chess columns laid in and a few loose ones as well. Some of his friends and other problemist names and addresses on pastedowns. These log-books were given to Frederick Gamage and friend and a protege of A C White as was Dobbs.

Gilbert S. Dobbs (Richmond, Kentucky, December 6 1867 - Carrollton, Georgia, February 14 1941) was a minister and chess composer. Son of a Baptist minister, Charles Edwin Willoughby Dobbs, he studied at Franklin College in Franklin Indiana and at Bethel College in Russellville , where he obtained an MA in 1888. Wanting to become himself a Baptist minister, he studied at the Southern Baptist Theological Seminary in Louisville, where he was ordained pastor in 1890. He exercised his ministry in various US cities: Bloomington, Brownsville, Memphis, New Orleans and finally Carrolton in Georgia . He was a renouned poet. He wrote his master's thesis on using the poem as a thesis. He was also one of the world's top ten chess problemists and composed in two and three moves, generally with positions aesthetically attractive with hard keys. In collaboration with Edward Hanna wrote the book The Emery Memorial, an unpublished gem composed on New Year's day, 1936 (Carrollton, 1937), dedicated to Canadian problemist Reginald George Emery (1904-1936). Alain C. White and Richard E. Cheney dedicated the book A Chess Silhouette: One Hundred Chess Problems By the Reverend Gilbert Dobbs (Overbrook Press, Stamford, 1942).

Fraying to edges, inner hinges cracked, occasionally soiled else a good but one of a kind item. (Inventory #: C0957)
$1,000.00 add to cart Available from Book Collector
Share this item
The Book Collector, Inc
Offered by