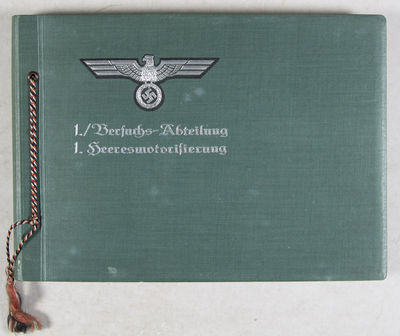 by n/a
Germany: NP, 1939. Original document. Hardcover. vg. Large oblong octavo. [5] leaves (Title and frontispiece portraits), [20] leaves. Original string bound olive cloth, with embossed Nazi eagle in silver, and silver lettering on front cover. Photo-album housed in its original cardboard slipcase. Title in green lettering. Tissue-guarded frontispiece portraits of Adolf Hitler, General von Brauchitsch (Commander-in-Chief of the German Army between 1938 and 1941), Großadmiral (Grand Admiral) Erich Raeder, and Hermann Goering, commander-in-chief of the Luftwaffe (air force). Stunning collection of 67 b/w photographs (including 59 original) taken by an unidentified German soldier during his military service in the few months preceeding WWII. The photographs are mounted on heavy cardstock, within an album offered by the military unit in which our soldier was serving (1. Heeresmotorisierung). There are numerous scenes with other fellow soldiers at the garrison, and during maneuvres. There are also photographs of various places, monuments, and ceremonies seen by our conscript during his service, such as: the Hermannsdenkmal (in Ostwestfalen-Lippe), a monument commemorating the Cherusci war chief Hermann (Latin: Arminius) and the Battle of the Teutoburg Forest in which the Germanic tribes under Arminius recorded a decisive victory in 9 AD over three Roman legions under Varus; the Olympic Bell Tower, and the Olympic Stadium in Berlin; a military parade and ceremony; the Albert Leo Schlageter* Memorial in Billerbeck. There are also 4 photographs showing the scene of an accident involving three vehicles of a military convoy. Laid in at rear are three 5 x 3 2/8" photographic portraits of our German soldier in civilian clothes, and an unidentified woman (in double) who could be our conscript's sweetheart.. or mother! The size of the photographs in the album varies from 3 2/8 x 2 3/8" to 3 1/2 x 5 3/8". Minor and sporadic soiling to covers. Title in German. Album in overall good+, interior in very good condition. * Schlageter was a member of the German Freikorps. His activities sabotaging French occupying troops after World War I led to his arrest and eventual execution by French forces. His death created an image of martyrdom around him, which was cultivated by German nationalist groups, in particular the Nazi Party. During the Third Reich, he was widely commemorated as a national hero. (Inventory #: 39292)
$1,250.00 add to cart or Buy Direct from
Eric Chaim Kline Bookseller
Share this item