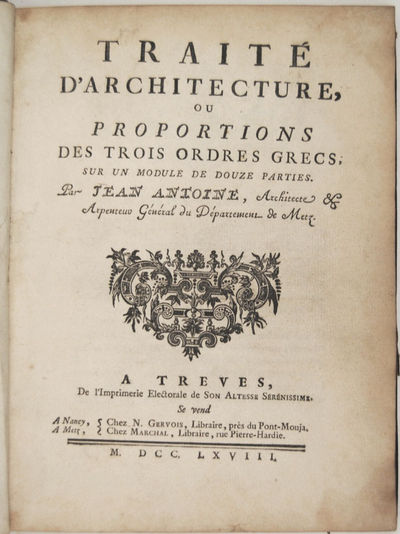 by ANTOINE, Jean
Treves: Imprimerie Electorale , 1768. Hardcover. Near Fine. Large 4to [25.5 x 19.5 cm]. (27) ff., pp. 1-132; 129-186, (5) folding plates, numerous woodcut illustrations in text, over 30 of them full-page. Bound in contemporary sprinkled calf, raised bands, gilt title label on spine, some scuffing to boards, upper board tender, edges sprinkled red, internally a very fresh copy with broad margins, excellent. Rare first and sole edition of this provincially published architectural treatise by an Alsatian architect seeking to promote his work in the wider cultural environment straddling the Franco-German language divide. The work was published in Trier five years after the completion of Antoine's most prestigious project to date, the hunting lodge Philippsfreude he built for the Palatine Elector Johann Philipp von Walderdorff (1761-63) in Wittlich, and which would be destroyed by French Revolutionary forces. The present work thus constitutes the principal, if not the only printed document for this building. Little information is available about Antoine, who identifies himself as chief architect and surveyor of the city of Metz. In the 1750s he worked on the abbey of St Vincent in that city which had been damaged by lightning, building two Gothic bays and a façade which incorporate elements of the three Greek orders. His design for a new Place Royale in the same city was however rejected. It was therefore something of a coup for Antoine to secure the contract for Philippsfreude, particularly since it meant ousting the official court architect of Trier, Johann Georg Seitz (1717-79). Antoine's Traité d'architecture is essentially a marketing ploy allowing him to present himself as an original architectural theorist, illustrating his arguments with the designs of his own projects, principally the façade of St. Vincent, his design for the Place Royale in Metz, and the castle in Wittlich, and exploiting the prestige of the French architectural tradition in a region which had yet to produce architecture of any distinction. The work also includes a 36-page index of architects from history and contemporary France with appropriate references to their theoretical writings, and a short treatise on the art of stone masonry, with illustrations of vaults, niches and so forth. Staircases receive a separate, detailed, treatment. Throughout, Antoine seizes every opportunity to emphasize the superiority of French architecture and take snipes at German building practices which he characterizes as heavy and inelegant. Antoine's obscurity today is partly due to the scarcity of remaining works of his: Philippsfreude was destroyed in 1793 in the context of the French Revolution, and all usable remains of the ruins were sold off under Napoleon. In some city records of Metz, the façade of St. Vincent is attributed to the architects Barlet and Louis, with no mention of Antoine's involvement. The work is not listed in OCLC, but we have located copies at the Getty and CCA. *BN record 04440090X; Getty record. (Inventory #: 5349)
$4,850.00 add to cart Available from Martayan Lan
Share this item
Martayan Lan, Inc.
Offered by