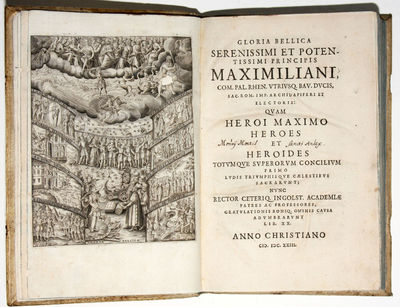 by [MAXIMILIAN I OF BAVARIA] / [THIRTY YEARS WAR] / STENGEL, Georg.
Ingolstadii: Ex officina typographica G. Haenlini, 1623. Hardcover. Near Fine. 4to [27 x 17.5 cm]. (17) ff., 388 pp. (recte 386), (7) ff., with misnumbered pages at pp. 203-06, 243-46 and 260-71, 1 full-page engraving [20 x 15.5, the platemark]. Bound in contemporary blind-stamped pigskin, raised bands, boards beveled, somewhat scuffed, clasps missing. Blue edges, small hole repaired on half title and engraving, ownership inscription of Andechs Abbey on title page, minor browning in some quires. An excellent and unsophisticated copy. First edition of a rare volume of prose and verse glorifying the military exploits of the Prince-Elector (Kurfürst) of Bavaria Maximilian I (1572-1651) by members of the University of Ingolstadt, as compiled by the Jesuit philosopher-theologian Georg Stengel (1584-1651). The Gloria Bellica is an important witness to the intertwining of princely power, university politics, and religious sectarianism at the onset of the Thirty Years War (1618-48). Published in the year of Maximilian's elevation to Prince-Elector (1623), the book seems to have been an attempt by faculty at Ingolstadt to secure his favor. The increasingly Jesuitical university would be frequently imperiled during the flux of the war and quickly identified Maximilian, himself educated by Jesuits, as an important military protector. Maximilian's central role in the German Catholic League had been essential in checking the power of the Protestant Union. The volume is especially notable for its full-page prefatory engraving executed by the Augsburg artist Daniel Manasser, a highly detailed and elaborate allegory charting Maximilian's martial rise and the praise conferred on him from various secular and sacred sources. Merchants, clerics, Liberal Arts herself, and a throng of lesser citizens crowd together to salute Maximilian as he rides upward on the back of Pegasus toward the Olympian gods reclining in the empyrean; the demigod Hercules mediates between heaven and earth while battling Nessus and the Lernaean Hydra. Flanking Maximilian's ascent are 8 groups from whom he receives "Gloria": his enemies, his commanders and soldiers, muses and scientists, hometown Bavaria, the Catholic League, the Holy Roman Emperor Ferdinand I, the pope and church, and indeed Mary, Christ and the saints. The text of the Gloria Bellica is arranged as a fuller version of this scheme, with 20 chapters each detailing a source Maximilian's glory. OCLC identifies U.S. copies at Harvard, Trinity (CT), Georgetown, and Chicago. VD 17 23:231047E; De Backer/S. and VII, 1550, 32; Lentner 3774; Pfister I, 4297; Mario Praz, Studies in Seventeenth-Century Imagery, (Rome: Edizioni di Storia e Letteratura, 1975) pp. 503-04. (Inventory #: 5340)
$1,850.00 add to cart Available from Martayan Lan
Share this item
Martayan Lan, Inc.
Offered by