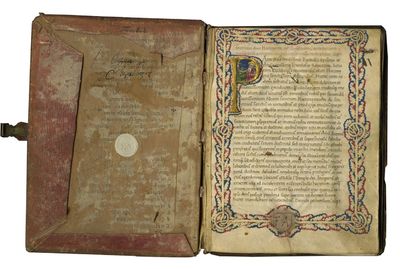 signed Hardcover
by Pseudo-Eusebius of Cremona, Pseudo-Augustine, Pseudo-Cyril of Jerusalem, Jerome
ILLUMINATED MEDIEVAL MANUSCRIPT IN LATIN ON PARCHMENT, Northern Italy, c. 1440-1470. 203 x 153 mm. 70 folios, complete (collation, i-vii10), remnants of quire and leaf signatures, flourished vertical catchwords, written in a humanist minuscule on 30 long lines (justification, 147-149 x 95-100 mm), horizontal lines ruled very lightly in ink, single vertical bounding lines ruled in lead, prickings remain in top and bottom margins on some leaves, rubrics and paragraph marks in pale red, two-line red or blue initials with contrasting pen flourishes in violet or red, two five-line blue initials, ff. 29v and 35, infilled and on square grounds of elaborate penwork; f. 64v, seven-line polished GOLD INITIAL with white vinestem decoration extending along twenty lines of text and into the upper margin, infilled and edged in deep red and blue with numerous tiny silver dots; f. 1, five-line polished GOLD HISTORIATED INITIAL of St. Jerome, bearded and dressed in red, standing before a Crucifix, with a hilly landscape in the background, on a white vinestem ground, extending into a FULL WHITE VINESTEM BORDER infilled and edged in deep red and blue with tiny silver dots and an erased coat of arms in lower margin, with modern? F.A.. BINDING: Early, almost certainly contemporary, reddish-brown leather over wooden boards, flat spine with three slightly raised bands, head and tail bands, clasp and catch fastening, front to back, with brass catch lettered ave, front cover decorated, most likely in the nineteenth century, with an attractive painted border in green, orange, and gray, connecting four brass studs, and the title, De laudibus et miraculis divi Hieronymi, with initials F.C. at the bottom, back pastedown is leaf from a late fourteenth-century Italian copy of Donatuss Latin grammar, front pastedown shows offset script from removed pastedown from a fourteenth-century Italian text in Latin verse. TEXT: This manuscript is a vivid witness to the importance of St. Jerome in fifteenth-century Italy, and includes the foundational texts for his cult: three letters regarding his death, miracles, and titles to glory and veneration and purporting to be written by three contemporaries of St. Jerome (c. 347-420), namely St. Eusebius of Cremona (d. 423), St. Augustine of Hippo (354-430), and Bishop Cyril of Jerusalem (c. 313-386), but probably written in Rome at the end of the thirteenth or beginning of the fourteenth century; a life of St. Jerome by an unknown author, probably writing in Italy in the twelth century; and Jeromes own life of St. Paul the Hermit, written in 374 or 375. These texts were widely disseminated in both Latin and in vernacular translations, and they influenced the work of numerous writers and visual artists. ILLUSTRATION: The iconographical choice in the historiated initial (f. 1) to depict the ascetic Jerome contemplating the Crucifixion dates from c. 1400 in Italy, and can be particularly associated with Hieronymite congregations in Tuscany. PROVENANCE: Copied in Northern Italy in the middle years of the fifteenth century, as suggested by the evidence of the script and decoration; the penwork initials in particular seem to point to Northern Italy. The manuscript almost certainly once included the coat of arms of its original owner in the lower margin of the illuminated border on f. 1. Three sets of initials are inscribed, in three different hands, all possibly initials of owners: within the roundel on f. 1 a modern owner inscribed an outline of a shield in pen and the initials F.A.; inside front cover, white embossed seal, with the initials L.F.; on front cover, as part of the added decoration, F[?]. C[?]. CONDITION: Slight loss of the leather at the back, top of the spine, and over the lower band of the binding; top of the painted border on f. 1 is very slightly trimmed; f. 1 is darkened; and there is some soiling throughout, but overall in very good condition. Full description and photos available (TM 656). (Inventory #: TM 656)
$58,000.00 add to cart Available from
Les Enluminures, Ltd.
Share this item
Les Enluminures, Ltd.
Offered by