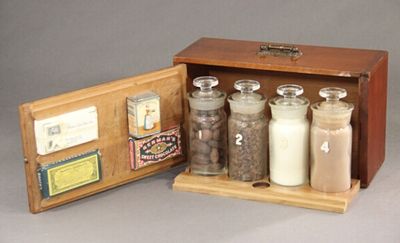 Dorchester, MA: Walter Baker & Co., Ltd, 1913. Oblong 8vo, pp. 39, [1], followed by 6 high-quality chromolithograph plates of Walter Baker products; 5 other full-page illustrations; fine in original maroon cloth, gilt-lettered on upper cover. The educational exhibit consists of what presumably is a salesman's wooden lacquered case (approx. 9½" x 5½" x 3½"), with a hinged lid on top, and a brass plaque and pull; mounted inside the lid are 4 Baker products, and inside the box itself are four apothecary viles, each still containing Baker products! Uncommon salesman's sample case and companion handbook which were released to promote the Walter Baker "health-giving breakfast cocoa and chocolate." The text explains the transformation of the cocoa seeds from the raw material, describes the early uses of cocoa and chocolate, a description and analysis of the cocoa seeds, the cocoa tree and the gathering of the crop. The four vials represent the various stages of cocoa production, and the cocoa tin mounted 1nside the lid preserves the trademarked chocolate server logo, La Belle Chocolatiere, adopted by the company in 1883 after a painting by the Swiss artists Jean-Etienne Liotard. Founded in 1780 the Walter Baker Company grew throughout the 19th century and into the 20th becoming one of the largest in the United States. Purchased by the Forbes syndicate in 1896, the brand was eventually absorbed in 1979 by Kraft Foods. (Inventory #: 47838)
$2300.00 add to cart or Buy Direct from
Rulon-Miller Books
Share this item