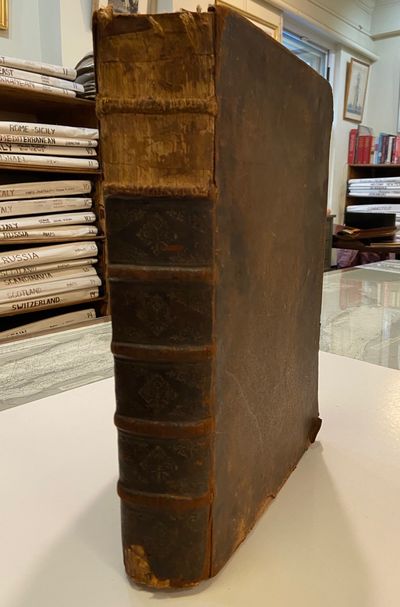 by HERBELOT DE MOLAINVILLE, Barthelemy d'
Paris: Compagnie des Libraires, 1697. First. hardcover. very good. Thick folio, pp. [32], 1059, [1]; rubricated title page, woodcut ornaments and initials; full contemporary calf, gilt- decorated spine. Spine in 7 compartments, leather on top 2 sections missing, lower section chipped, edges quite rubbed, damp stain in upper hinge affecting margins of first 30 pages. Some pages evenly toned. Based on the immense Arabic bibliography (the Kashf al- Zunun) of Hadji Khalfa (Katip Ã‡elebi), of which this is largely an abridged translation. This volume also contains the substance of a vast number of other Arabic and Turkish compilations and manuscripts. Four editions of this encyclopedia on the culture and history of the Near East were printed, the last being 1781-83. Atabey Sale, 563: "Herbelot spent the last thirty years of his life working on his BibliothÃ¨que orientale, a landmark in Arabic studies which was unfinished at his death and completed and published two years later by the orientalist Antoine Galland in 1697. He knew a range of languages, including Arabic, Turkish, Persian, Aramaic, Syriac, and Hebrew, and was familiar with their literature and history, of which this work forms an encyclopaedia." Paris: Compagnie des Libraires, 1697. First edition. Very good. (Inventory #: 262507)
$1,500.00 add to cart or Buy Direct from
Argosy Book Store
Share this item