National Sports of Great Britain, The 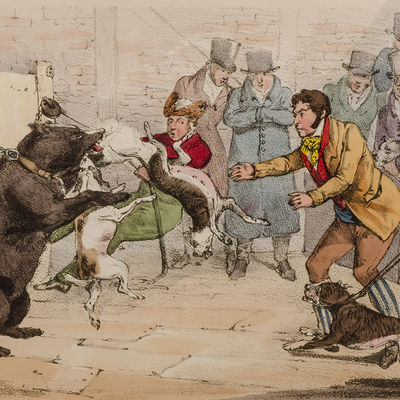 first edition
by ALKEN, Henry
London: Printed for Thomas M'Lean, 1825. He could draw Hunting and write about it because he hunted himself, as Ferneley did, or Herring"
Fifty Fine Hand-Colored Etched Plates Depicting The National Sports of Great Britain

Contemporary half red calf over pink boards, smooth spine ruled and lettered in gilt, hinges expertly and almost invisibly repaired, all edges sprinkled red. With the bookplate of Joel Spitz on front paste-down. A near fine copy with all the plates bright and fresh.

Despite having the same title as the folio of 1821, this work, published at three guineas, contains a different series of plates, some drawn from earlier works. The work includes six plates of horse racing, ten of fox hunting, six of coursing, twelve of shooting, and two of fishing, together with others of poaching and the baiting sports about which Alken himself was so critical. No doubt he believed that representing them as ‘National Sports' was better than pretending they did not exist. The one sport depicted that does not involve animals is prize fighting.

"Alken himself seems to have drawn in colours and engraved the plates, which like most of his book illustrations are peculiarly pleasing on account of their small size. The preface deals with, and condemns, the prevailing practice of baiting animals, although the three last plates depict various forms of this barbarous sport." (Schwerdt)

London: T. Fisher Unwin, 1896
(click for more details about An Outcast of the Islands)