HIS PLACE FOR STORY: ROBINSON JEFFERS: A DESCRIPTIVE BIBLIOGRAPHY 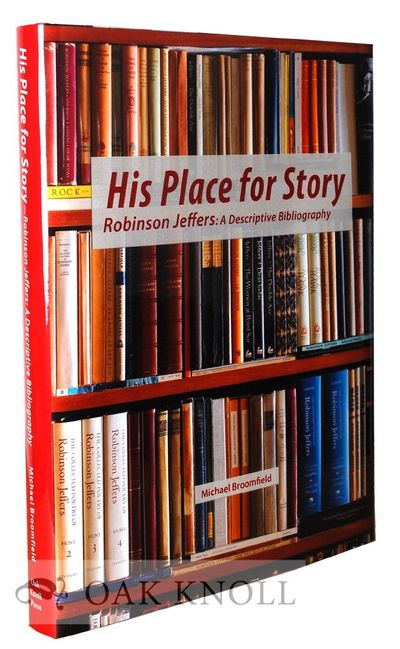 by Broomfield, Michael
New Castle, DE: Oak Knoll Press, 2015. Hardcover, dust jacket. 8.5 x 11 inches. Hardcover, dust jacket. 272 pp text plus 72 pp b/w images (repeated in color on CD). "A marvelously comprehensive bibliography of Jeffers that reads like a detective novel and makes me want to peek into every item mentioned and immerse myself in his poetry." - Charles Simic

From the mid-1920s through the early 1930s, Robinson Jeffers was ranked by many critics as one of Americas most important living poets. By the end of the 1930s, however, he was widely thought to have little new to say, and his reputation and readership declined. His anger at mankinds careless destruction of natural resources and his indifference to World War II further reduced his following.

In recent decades, Jeffers has been rediscovered as an early critic of the 20th centurys offenses against the natural world, and academics and critics again recognize the depth and complexity of his work. In light of this resurgence, it has long frustrated scholars and collectors that no one had carried forward S.S. Alberts's 1933 A Bibliography of the Works of Robinson Jeffers. That work provides invaluable material on Jeffers's early work and most productive period, but leaves undocumented his output during his remaining 30 years and since his death in 1962, including books, pamphlets, and broadsides issued by such important small presses as those of Ward Ritchie, the Grabhorns, and William Everson.

His Place for Story both revisits the years covered by Alberts (correcting errors) and adds full descriptive entries for all known separate Jeffers publications and for selected other publications with Jeffers contributions. Dana Gioia, a poet and critic and former Chairman of the National Endowment for the Arts, provides a preface and Tim Hunt, editor of The Collected Poetry of Robinson Jeffers, an afterword. Extensive appendices supply additional information on appearances of Jeffers's poetry and prose. Illustrating the text are over 400 images of book covers, jackets, broadsides, and other items, in greyscale in the printed volume and in color on an accompanying CD. This is a guide to Jeffers's work that libraries, researchers, and collectors will find indispensible.

Michael Broomfield has what is likely the most extensive private collection of Jeffers books and broadsides. This is his second book, following a John Updike bibliography co-authored with Jack De Bellis and published by Oak Knoll in 2007. (Inventory #: 119716)
$75.00 add to cart or Buy Direct from Oak Knoll Books
Share this item

VISIONARIES & FANATICS: AND OTHER ESSAYS ON TYPE DESIGN, TECHNOLOGY, & THE PRIVATE PRESS

Ann Arbor, MI : Legacy Press, The , 2021
(click for more details about VISIONARIES & FANATICS: AND OTHER ESSAYS ON TYPE DESIGN, TECHNOLOGY, & THE PRIVATE PRESS)