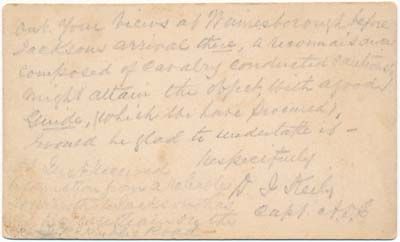 signed
by KEILY, Daniel J. (1829-67)
This Union officer served on the staff of Brigadier General James Shields (whose troops faced Stonewall Jackson's Confederate troops in the Shenandoah Valley in June 1862) and later commanded the Second Louisiana Regiment Cavalry; he was a good friend of famed Irish soldier Miles W. Keogh (1840-76, killed in the Battle of the Little Bighorn), who served under him in the Papal Army during the Italian rebellion in 1860 and who fought with him in the Battle of Port Republic; he's reported to have become enamored with famed Southern spy "Belle" Boyd" at one point and to have unwittingly revealed military secrets to her. Outstanding pencilled ANS, 2pp (recto and verso), heavy stock 4" X 2½" card, "Conrad's Bridge" (Virginia), n.d. (ca. early June 1862). Addressed to "General" (probably James Shields). Very good. Lightly age toned. In this remarkable small report, Keily reports in a small, tight but fairly legible hand to his commander that "Col. Carroll moves his comm'd. at [ ? ] p.m. and will push on as rapidly as possible, some cannonading heard this morning in the direction of Harrisonburg, I would respectfully submit that if the Infantry did not move rapidly enough, to carry out your views at Wainesborough before Jacksons arrival there, a reconnaisance composed of cavalry conducted cautiously might attain the object, with a good Guide (which we have procured), I would be glad to undertake it -- respectfully," and signs off, adding his rank "Capt. A.D.C" beneath. A rather light, challenging to transcribe postscript reads, "P.S. Just received information from a reliable source that Jackson has [--- --- ---] Train on the [---] Pt. Republic Road." It's difficult to precisely date Keily's note, but General Shields did write General McDowell on June 4, 1862 that "Colonel Carroll... after a forced night's march, reached Conrad's Bridge this morning at 5 o'clock, which bridge he found burned" -- which likely dates Keily's letter from this date or shortly after. Whether Shields took Keily up on his offer to lead a cavalry reconnaissance is unclear. Shields (1810-79) is perhaps best remembered as the Illinois politician who almost fought a duel with Abraham Lincoln in 1842; he's also the only person in American history to serve as U.S. senator from three different states (Illinois, Minnesota and Missouri); as a brigadier general of volunteers in the Civil War, his lackluster performance as commander of the 2nd Division of the V Corps in the Army of the Potomac during the crucial Valley Campaign caused him to resign his commission. On June 9th, the Battle of Port Republic took place, a costly Confederate victory in which Jackson's 6,000 troops faced off 3,500 Union troops, losing just over 800 men to the Union's loss of just over 1,000 men -- a battle at which Keily himself was severely wounded in the face while leading a charge of Ohio cavalry up a hill into a barrage of Confederate artillery fire. The following year, after painful recuperation, Keily ended up on the staff of General Charles P. Stone in New Orleans, recruiting cavalry troops in that occupied state. Late in the war he was court-martialed for "conduct unbecoming an officer," but the charges were shown false and by the end of the war he was brevetted a brigadier general. Keily died from yellow fever in Louisiana at age 38 shortly after the war's end, making his autograph material quite scarce -- and a choice war-date item such as this most desirable. This remarkable war-date communication sheds interesting light on Shields as commander during the disastrous Valley Campaign. (Inventory #: 40474)
$1,500.00 add to cart or Buy Direct from
Main Street Fine Books & Mss.
Share this item

New York : Mason Brothers , 1864
(click for more details about General Butler in New Orleans. History of the Administration of the Department of the Gulf in the Year 1862: With an Account of the Capture of New Orleans, and a Sketch of the Previous Career of the General, Civil and Military)
View all from this seller>