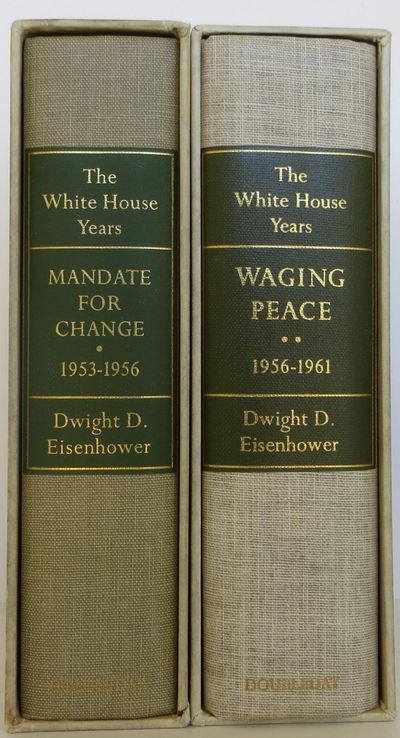 by DWIGHT EISENHOWER
Doubleday & Company, Inc., Garden City, NY, 1963. 1st Edition. Hardcover. Fine/No Jacket. Two Volume Signed Limited Edition Both volumes in exceptional condition with original clear mylar cust jacket. Light olive cloth covered boards with Presidential Seal embossed in gold on cover boards, titled in gold on spine within a larger, darker olive green title block. Front endpapers of Volume I are illustrated with a map of the United States, rear endpapers a map of Africa, Europe, the then-Soviet Union, and Asia. Front endpapers of Volume II are illustrated with a map of the World, rear endpapers also a map of the World but from a different perspective and delineating the many United States alliances. Each volume is crisp and clean within and appears to never have been read. Each volume signed by Dwight D. Eisenhower in black ink on tipped in page preceding the title page, facing the limitation page. Both volumes are number 1229. There were a total of 1,500 copies of each volume printed. Each volume comes in its original, paper covered slipcase; both in fine condition/ $4,500 for the set. Also housed in custom-made collector's slipcases. (Inventory #: 1508168)
$4,500.00 add to cart Available from Bookbid
Share this item
Bookbid Rare Books
Offered by

Harry Potter and the Chamber of Secrets

Bloomsbury , 2004
(click for more details about Harry Potter and the Chamber of Secrets)

New American Library , 1968
(click for more details about 2001 A Space Odyssey)
View all from this seller>