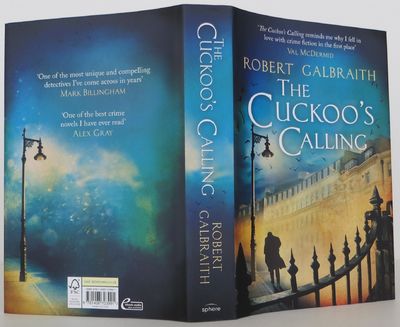 by Rowling, J.K. as Galbraith, Robert
Sphere, London, 2013. 1st Edition. Hardcover. Fine/Fine. Rowling wrote this book under the pseudonym Robert Galbraith. Sphere (A division of Little Brown), London 2013. Signed on the title page by Rowling as Galbraith. A Fine Unread copy in a Fine dust jacket. UK First Edition, First Printing. Issue points: First Published in Great Britain in 2013 by Sphere, stated on the copyright page; copyright page does not denote any re-print statement. The rear of the jacket features 2 quotes, one each by Mark Billingham and Alex Gray, along with a street lamp illustration. The back flap of the dust jacket contains a biography of Robert Galbraith that contains no mention of J.K. Rowling. Reportedly only 1500 copies were printed of this first/first written under a secret pseudonym. A very collectible edition. Housed in a custom-made slipcase. We will provide a certificate of authenticity. (Inventory #: 1408508)
$4,500.00 add to cart Available from Bookbid
Share this item
Bookbid Rare Books
Offered by

Harry Potter and the Chamber of Secrets

Bloomsbury , 1998
(click for more details about Harry Potter and the Chamber of Secrets)

Harry Potter and the Philosopher's Stone

Bloomsbury , 1997
(click for more details about Harry Potter and the Philosopher's Stone)
View all from this seller>