Travels into several Remote Nations of the World. In Four Parts. By Lemuel Gulliver, First a Surgeon, and then a Captain of several Ships 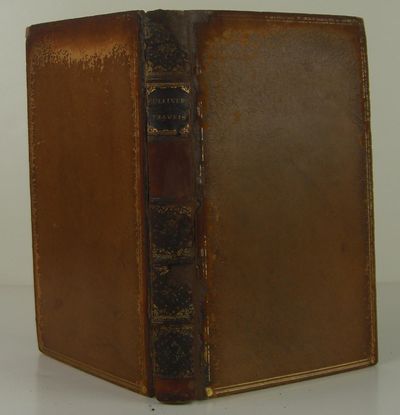 by Swift, Jonathan
Motte, 1726. 2nd Edition. Hardcover. Very Good/No Jacket. Printed for Benj. Motte, 1726. frontispiece portrait (in second state) and 6 further plates. A mixed set, with Volume One the second edition (Teerink AA) and Volume Two the third edition (Teerink B). The first three editions were once considered to be different issues of a single first edition. Later bibliographical analysis demonstrated that they were separate editions, each set from the previous, but Teerink, acknowledging the work done to identify them, still thought it advisable to stick to the well established practice of calling the three 1726 editions first, in part because both the printer and the author thought of them that way. Very good condition, handsomely bound in leather, with the Volume I leather label missing from one spine. With the bookplate, dated 1894, of Edwin B. Holden, the one time president of the Grolier Club and the builder of a renowned collection. Housed in a custom-made collector's slipcase. (Inventory #: 1308104)
$8,000.00 add to cart Available from Bookbid
Share this item
Bookbid Rare Books
Offered by

The Long Dark Tea-Time of the Soul

London, UK : Heinemann , 1988
(click for more details about The Long Dark Tea-Time of the Soul)
View all from this seller>