Chiasmadon. With a relief print by Claire Van Vliet 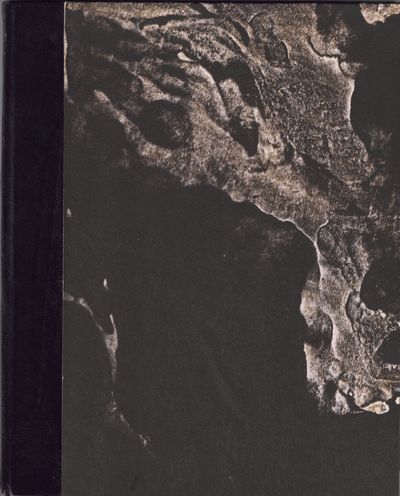 by HUGHES, Ted
(Baltimore, MD): Charles Seluzicki, (1977). First edition. One of 5 or 6 copies specially bound for participants of the edition out of a total edition of 175 copies printed at the Janus Press and signed by Hughes and Van Vliet. According to the colophon there were 120 copies for sale, and 55 copies hors commerce. The bibliographers note that: "There were ten copies out of series.  Of these, six were special copies for the participants in the project, each containing an extra line printed with the recipient's name and bound in decorated boards with black leather spines.  Hughes did not sign these special copies, possibly through an oversight.  Of the four remaining out of series copies, two were signed." Sagar & Tabor A52. The present ad personam copy, however, is designated "for Victoria Fraser" in Van Vliet's hand on the colophon page, and is also signed by Van Vliet and Hughes. Victoria Fraser collaborated with Claire van Vliet on a number of Janus Press publications. Ruth Fine, on the other hand, notes that "Five copies were specially bound by SJ (Susan Johanknecht): ¼ black leather with fragment of CVV lithograph used as decorative cover papers over boards; Adriatic blue Fabriano Miliani Ingres endpapers and flyleaves." - Ruth Fine, The Janus Press 1975-80. Catalogue Raisonné. An Exhibition at The Robert Hull Fleming Museum at The University of Vermont in Burlington, 1982,p.40. A very fine copy. Square 8vo, original quarter black leather and decorated paper boards by Susan Johanknecht. A very fine copy. (Inventory #: 23069)
$3,500.00 add to cart or Buy Direct from
James S. Jaffe Rare Books
Share this item
James S. Jaffe Rare Books LLC
Offered by

Good-Bye To All That. An Autobiography

London : Jonathan Cape , (1929)
(click for more details about Good-Bye To All That. An Autobiography)

What The Negro Wants

Chapel Hill, NC : University of North Carolina Press , (1944)
(click for more details about What The Negro Wants)
View all from this seller>