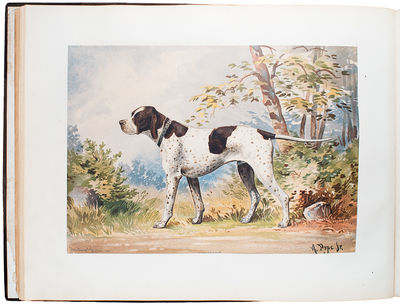 10 parts in one [complete], oblong folio

Very rare American work on dogs, with chromolithographed images after Alexander Pope, Jr. Only two copies listed as having sold at auction in the past thirty-five years - the last copy in 1987.

"The style of the present work is entirely original ... The pictures are painted from life by Alex. Pope, Jr., whose Upland Game Birds and Water Fowl of the United States, and wood carvings of Game Birds, have made him familiar to the sportsmen art lovers of this country ... The Celebrated Dogs of America will be issued monthly, in parts composed of two plates, 16 1/2 by 20, and accompanying letter-press. The series will be completed in ten parts, at $2 per part. The plates will be exact reproductions of the water-color paintings, and will be superior to anything heretofore produced of this nature ... The work will be sold only by subscription..." (prospectus).