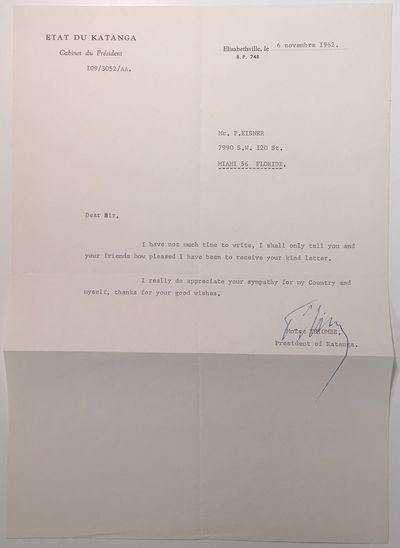 by TSHOMBE, Moise (1919 - 1969)
Elisabethville, 1962. unbound. Rare and intriguing letter, 11.75 x 8.25 inches, Cabinet of the President, Elisabethville, November 6, 1962, in English, written during his pseudo reign, to anti-Communist supporters in Miami, Florida, recovering from their failure to overthrow Fidel Castro and the aftermath of the Cuban Missile Crisis, in full: "I have not much time to write, I shall only tell you and your friends how pleased I have been to receive your kind letter. I really do appreciate your sympathy for my Country and myself, thanks for your good wishes." Fine condition. Congolese radical Politian who, in 1961, became President of the Government of the Province of Katanga, eventually seceding from the rest of the Congo. He succeeded in getting military assistance from Belgium and was responsible for Patrice Lumumba being transferred to Katanga where he was executed. After U.N. forces re-captured Katanga in 1963, Tshombe was driven into exile in Northern Rhodesia. He briefly returned as Prime Minister a year later but was eventually dismissed. In 1967 Joseph Mobutu filed charges of treason against him and he was sentenced to death. (Inventory #: 265463)
$400.00 add to cart or Buy Direct from
Argosy Book Store
Share this item