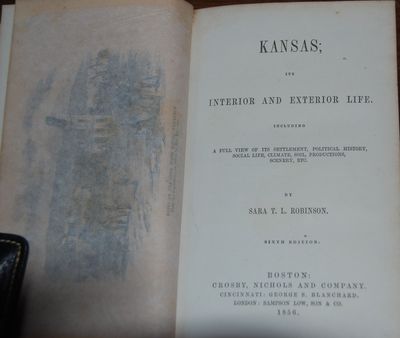 by ROBINSON, Sara T[appan] L[awrence]
Boston: Crosby, Nichols and Samson Low, 1856. Sixth Edition. 8vo, pp. 366. Engraved frontispiece. Bound in publisher's cloth (little worn at the top of the spine), a very good clean tight copy. Rampaging Herd #1921; Rader 2F04; Sabin 72178; Wagner-Camp 380a; Afro-Americana 8934. Sara Tappan Doolittle Robinson (née Lawrence) was the wife of the first governor of Kansas, Charles Robinson (1818-1894). This book has been described by the Kansas historian F. W. Blackmar as "one of the best works on the early history of Kansas, and a classic. It is both history and literature." It portrays what life was like in "Bleeding Kansas," the chaotic time leading up to the Civil War in which both slave states and free states tried to claim the Kansas territory as their own. In her account, Mrs. Robinson "graphically sets forth the scenes, actors and events of the struggle between the anti-slavery and the pro-slavery factions of Kansas in that early day. This work had a wide circulation and is today reckoned among the most valuable productions touching that period of Kansas history with which it deals" (Kansas: A Cyclopedia of State History III:25). (Inventory #: 55624)
$193.00 add to cart or Buy Direct from
Second Life Books
Share this item