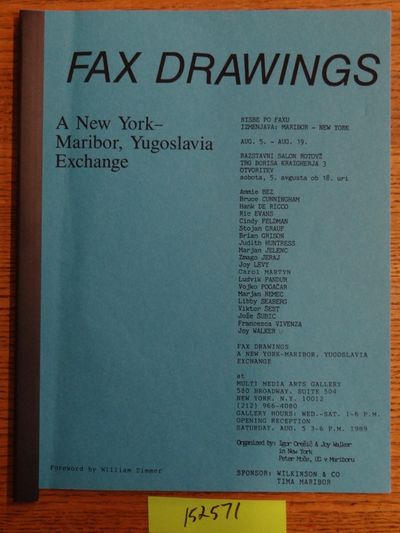 by Zimmer, William
New York, NY: Multi Media Arts Gallery, 1989. Softcover. VG. Blue paper covers with black plastic spine (holder); 40 leaves, BW drawings. Issued in conjunction with a 1989 exhibition of drawings faxed between artists in New York and artists in Maribor, Yugoslavia (now Slovenia). Think B.T.W., Before the Web. It may seem like a laughable concept now. But to have the ability to fax a drawing from one side of the globe to the other in a timely fashion was a pretty nifty idea. Artists who participated are: Ammie Bez, Bruce Cunningham, Hank De Ricco, Ric Evans, Cindy Feldman, Stojan Grauf, Brian Grison, Judith Huntress, Marjan Jelenc, Zmago Jeraj, Joy Levy, Carol Martyn, Ludvik Pandur, Vojko Pogacar, Marjan Remec, Libby Seaberg, Viktor Sest, Joze Subic, Francesca Vivenza, and Joy Walker. William Zimmer's foreword is amusing, knowing what we know now. He wondered if "a hundred years from now, a major artist will assert that Fax is the central principle of all art in the twenty-first century." His was a good guess, and only slightly off the mark. Scarce. (Inventory #: 152571)
$45.00 add to cart or Buy Direct from Mullen Books
Share this item