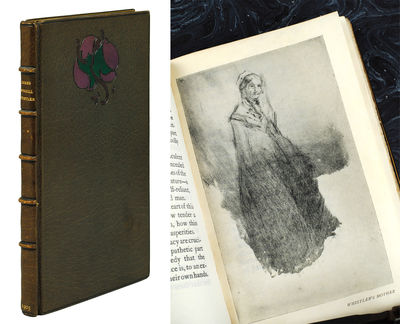 by Macfall, Haldane.
Slim 8vo. Edinburgh & London: T.N. Foulis Press, 1905. Slim 8vo, 70 pp. Bound by Pender in lush decorated morocco with Whistler’s stylized butterfly with a stinger on upper cover in green and purple. With 16 illustrations including a frontispiece caricature portrait of the author. Top edge gilt and gilt ruling at turn-ins, with silk endpapers. Very minor foxing to edges, final leaf of ads pasted together with final page of text. § Limited edition of 1000 copies. The first title in the publisher's Spirit of the Age series was Macfall’s biography of James Abbott McNeill Whistler, the enigmatic and acerbic American painter. This is an interesting association copy, being inscribed to Sir Gervase Beckett (“Gee”) by Elizabeth Helen Vane-Tempest-Stuart, Marchioness of Londonderry. She was known as the “last great political hostess” and he was the younger brother of Lord Grimthorpe, father of Rupert Hart-Davis, and his daughter married Anthony Eden later Prime Minister. Beckett may well have been a member of the “Ark” a literary group founded by the Marchioness that used to meet at her magnificent London mansion Londonderry House in Park Lane. A later hand has identified the inscriptions and added: “Given to me Xmas 1959 MB” and below that in pencil “Ex Alex Wright LJ July 82”. (Inventory #: 106477)
$875.00 add to cart or Buy Direct from
John Windle Bookseller
Share this item

A Study of Nature and Other Poems.

Leicester : The Dryad Press
(click for more details about The Dryad Writing Cards.)
View all from this seller>