A New Map of Present Asia; Present Asia Distinguisht into its general Divisions or Countries together with their Capital Cities Chief Rivers Mountain etc. 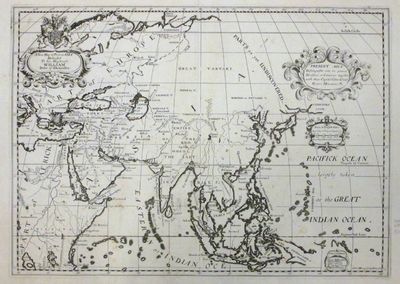 by WELLS, Edward
Oxford: WELLS, Edward, 1701. unbound. Michael Burghers. Map. Uncolored copper plate engraving. Image measures 14 3/8" x 19.5". This striking map of Asia depicts the continent in beautiful detail from the Mediterranean Sea and Italy east to include Japan. The geography of the encloses region is richly defined, with rivers, deltas, cities and lakes notes and with elevation rendered in profile. Particularly notable is the mapping of northeastern Asia. Lake Chimay (Chiama Lake), the mythical lake located in northern Burma which was believed to be the source of the river system in Southeast Asia is identified. The mysterious Companies Land is also identified. Company's Land and Gamma Land were considered to be the early mappings of the Kurin Islands discovered by Maerten de Vries and Cornelis Jansz Coen in 1643. They believed that these islands were part of America, which was separated from Asia by the Strait of Vries. In 1729, Bering finally debunked their myth, but the islands appeared in maps for another 50 years. The map includes beautiful cartouches. The map is in very good condition with minor wear along centerfold. Some scuffing over Bay of Bengal. Slight stains in lower quadrants. Flattened and lined with archival paper. Published in "A New Sett of Maps Both of Antient and Present Geography". Edward Wells (1667-1727), a mathematician and geographer, dedicated this atlas to the young Duke of Gloucester, son of the future Queen Anne. The Duke (age 11) was studying at Oxford at the time of printing and his tutelage may account for Wells' unusually sparse style. Instead of focusing on grand decoration, perhaps Wells used a simpler approach for educational purposes. (Inventory #: 265333)
$850.00 add to cart or Buy Direct from
Argosy Book Store
Share this item