Catalogues of the birds, shells, and some of the more rare plants, of Dorsetshire. From the new and enlarged edition of Mr. Hutchins's history of that county ... With additions; and a brief memoir of the author 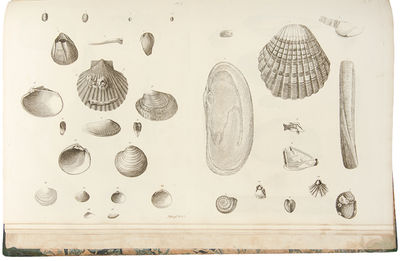 Provenance: Dawson Turner (inscribed by Rackett on the title and with an additional inscription on the endpaper concerning publication)

Inscribed copy of the first illustrated edition of a rare catalogue of British birds, plants and shells.

Richard Pulteney received his doctorate in medicine from the University of Edinburgh in 1764, before serving as the personal physician to the Earl of Bath. Following the Earl's death, he resided and practiced in Blandford, Dorset. Besides membership in a host of medical societies, Pulteney was elected a Fellow of the Royal Society, as well as a Fellow of the Linnean Society. Indeed, he was an early promoter of Linnaean taxonomy, and authored the first English biography of Linnaeus in 1781. His cabinet of specimens, noted particularly for its shells, was donated to the Linnean Society following his death in 1801. The first edition of 1799 was privately-published by Pulteney with few copies printed. An inscription in this copy by the editor of this new edition reveals that copies of the first edition were further destroyed by fire: "The first Impression of Dr. Pulteney's Catalogues was printed in 1801 [i.e. 1799], but never published, the whole having been destroyed by the fire, at Mr. Nichols's printing office [in 1808]. I have been enabled to make considerable additions in this second impression, from communication by various scientific friends, and from my own obervations." Rackett's revised edition was the first to be illustrated, containing a portrait of Pulteney, a plate depicting 17 shells titled Melbury Fossils (engraved by J. Cary after Mary Foster), and 23 engraved plates of shells on 12 sheets. The plates numbered I-XXIII are new engravings of those by De Costa in his Historia Naturalis Testaeorum Britanniae, with several additions, depicting over 200 species. This copy with important provenance to Dawson Turner (1775-1858), a noted botanist, antiquary and Fellow of the Royal Society. Turner's scientific studies centered on cryptogamic plants and he formed large botanical collections, mainly of algae, which are preserved at Kew within the herbarium of his son-in-law and fellow botanist Hooker.